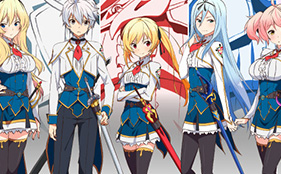 The official website of the anime adaptation of Senri Akatsuki and Ayumu Kasuga’s Saijaku Muhai no Bahamut light novel series has revealed that the TV anime will be airing from January 2016 during the winter 2016 anime season. In addition, the first members of the cast and a brand new visual was also revealed. The first members of the anime’s main cast have been revealed and includes: Saijaku Muhai no Bahamut  is a Japanese light novel series, written by Senri Akatsuki and illustrated by Ayumu Kasuga. SB Creative has published six volumes since August 12, 2013 under their GA Bunko imprint. A manga adaptation written by Itsuki Watanabe, with art by Fumi Tadauri, began serialization in Square Enix and GA Bunko’s online magazine Gangan GA from 2014. It has been collected in a single tankobon volume.