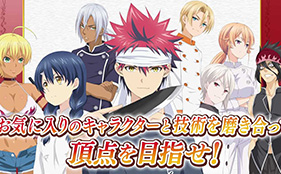 The official website of the anime adaptation of Yuuto Tsukuda and Shun Saeki’s Shokugeki no Souma (Food Wars: Shokugeki no Soma) manga has revealed a video for the upcoming Shokugeki no Souma Nintendo 3DS game coming out in Japan on December 17. The game features an original story that takes the series’ cast to a lone island in Europe for a cooking battle tournament.

The video features the opening theme of the Shokugeki no Souma anime, “Kibou no Uta” by Ultra Tower.

Last May a teaser for the game was revealed: