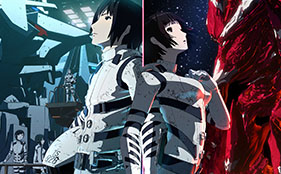 The official website for the anime adaptation of Tsutomu Nihei’s Sidonia no Kishi (Knights of Sidonia) manga series began streaming the main promotional video for the compilation film of the first anime series on Friday. The opening theme for the first series titled Sidonia by angela is previewed in this new promotional video.

Two promotional videos were streamed earlier in January and December: