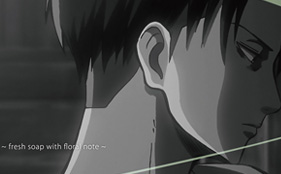 Have you ever wondered what it would like it to be Levi, the most badass character in Attack on Titan? Well now you too can smell like the strongest man in the world as Japanese anime accessory manufacturer Koubutsu-ya have unveiled a new line of aroma fragrances based on the anime adaptation of Hajime Isayama’s Attack on Titan (Shingeki no Kyojin) manga. The new line of fragrances are based on the main characters of the anime.

A total of 7 fragrances are being sold based on the main characters of the series. Each purchase will come with one bottle containing 30ml of your desired fragrance, with one bottle is going for ¥5,500 (~ $46.10 USD) before tax.

The first fragrance is of the series’ main character Eren Jaeger. His aroma is a strong fresh citrus and passionate spice. This unique fragrance, which blends the spice of cardamom and Anise, and fresh citrus of lemon and grapefruit, defines the thoughts of Eren in his passion to eradicate the titans from the world. 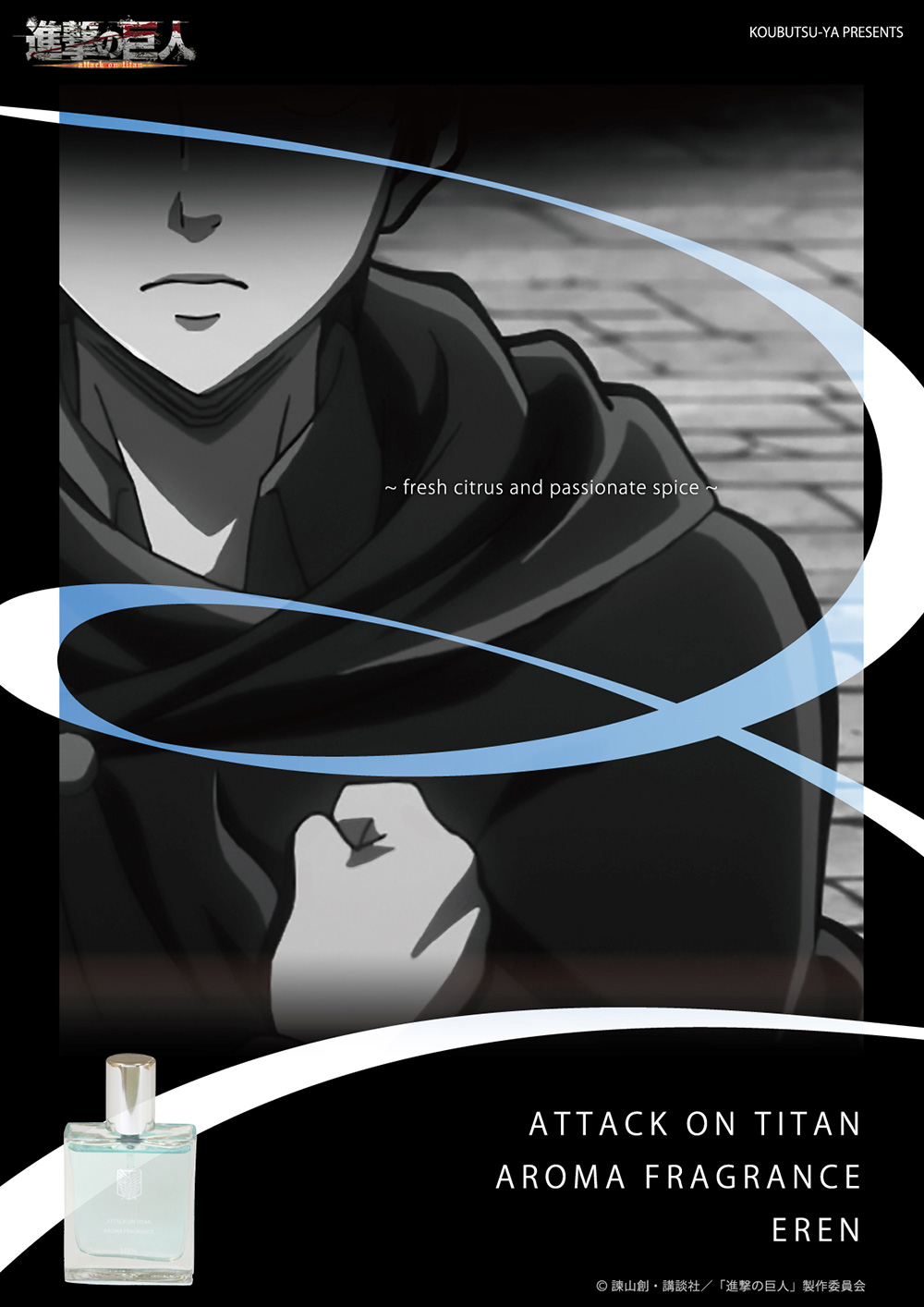 The next fragrance is of Mikasa Ackerman, which captures her sweet cassis and rose bouquet aroma. The aroma works from its fruit cassis top before its scent mixes and moves on into the floral scents of rose, before finally getting the last hint of sweet raspberries. This captures Mikasa’s hidden feminine feelings towards Eren, which gives her strength and composure. 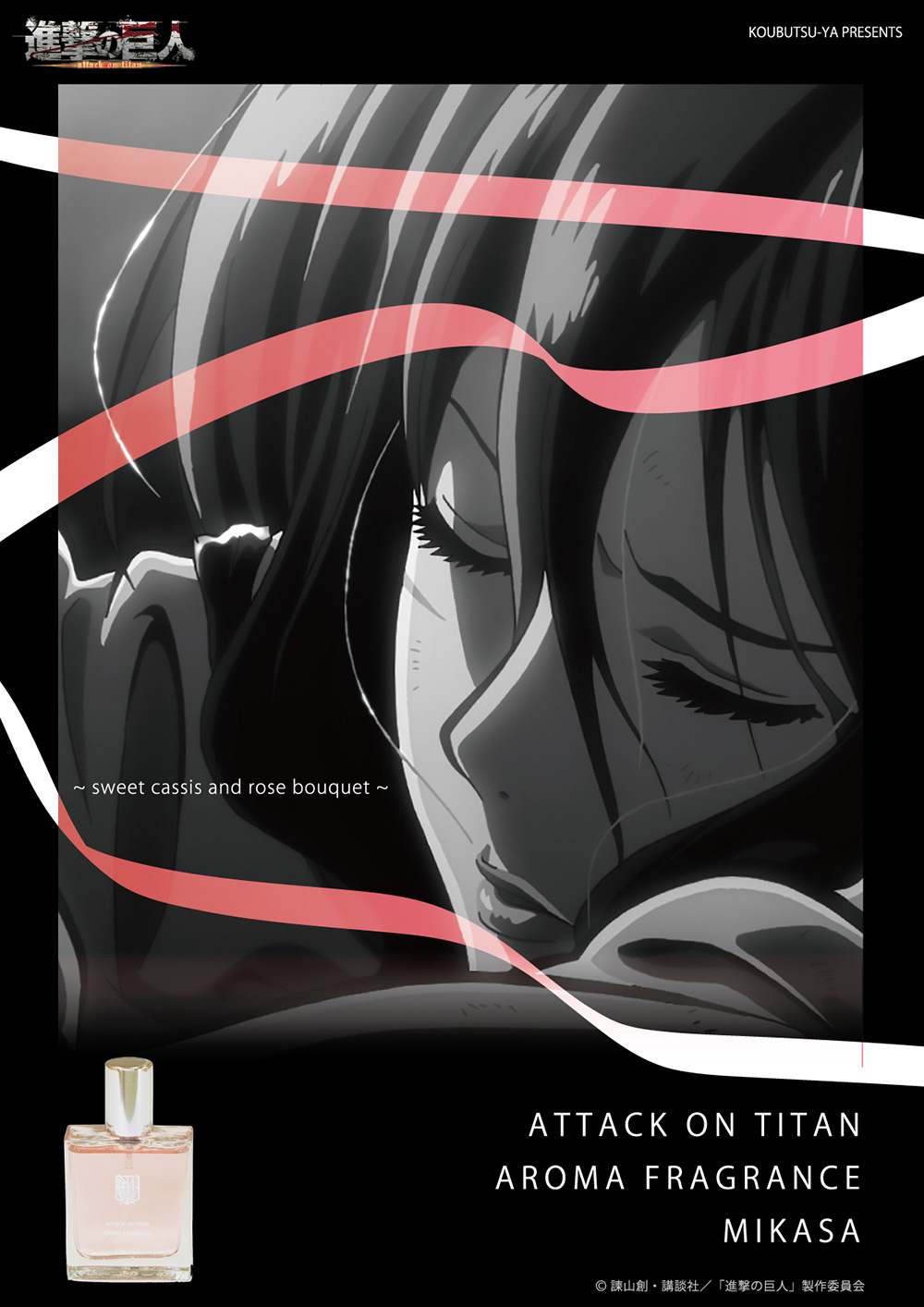 Moving on to the next product is Levi, a soft yet fresh soap with floral “noat” aroma. The fresh soap gives off the scent of cleanliness with the floral smell of lotus that changes into a scene of a calm cedar wood. In conjunction with Levi’s great combat career and being touted as the strongest man, his character is obsessed with being clean, something which may be attracting someone, somewhere… 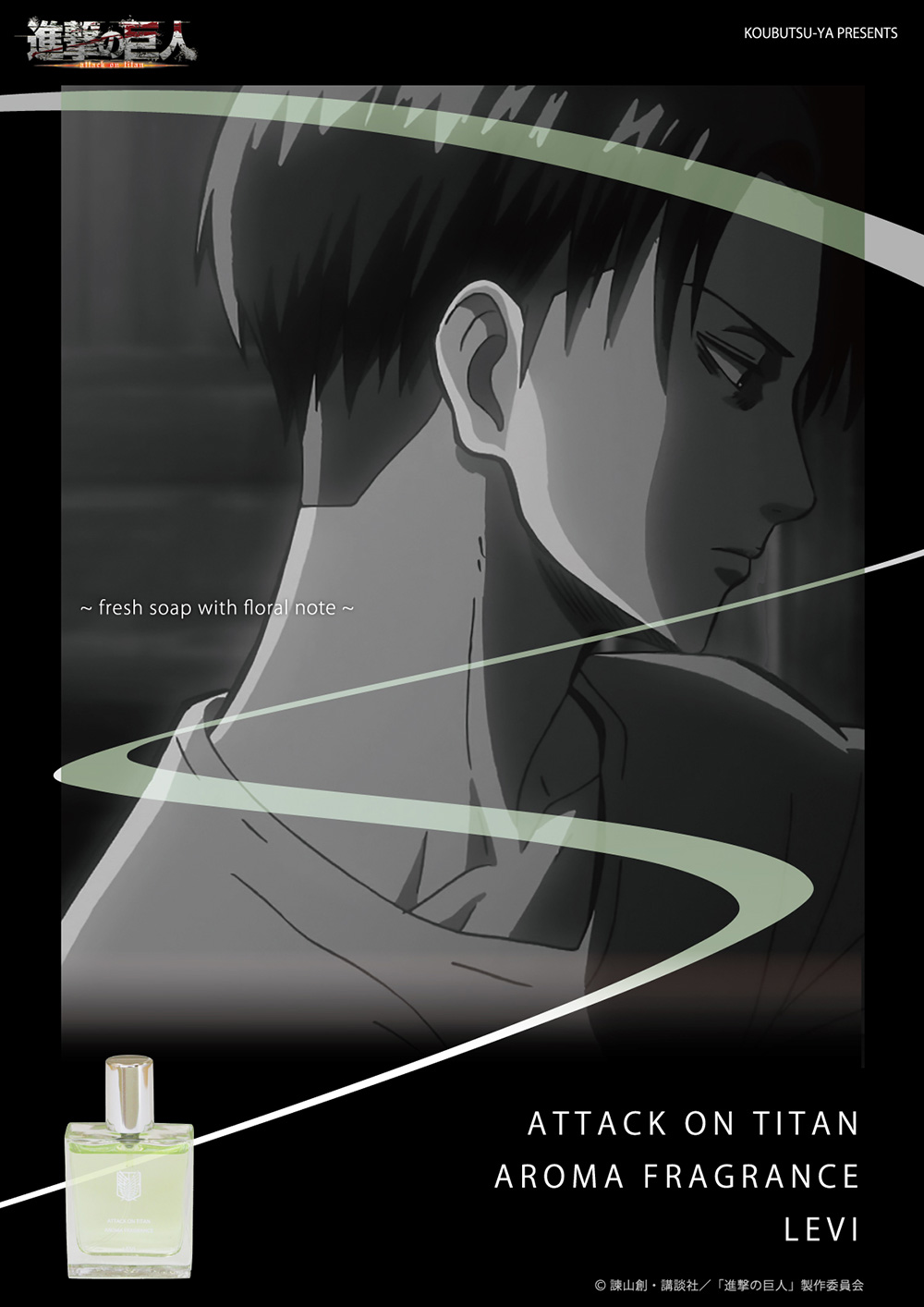 The following fragrance is based on Armin Arlert, a tender vanilla aroma that expels willpower. The vanilla aroma brings out Armin’s strength of being kind and strong willed and is blended with a touch of acidity from citrus fruits, showcasing his coexistence in making tough decisions as a friendly young man. 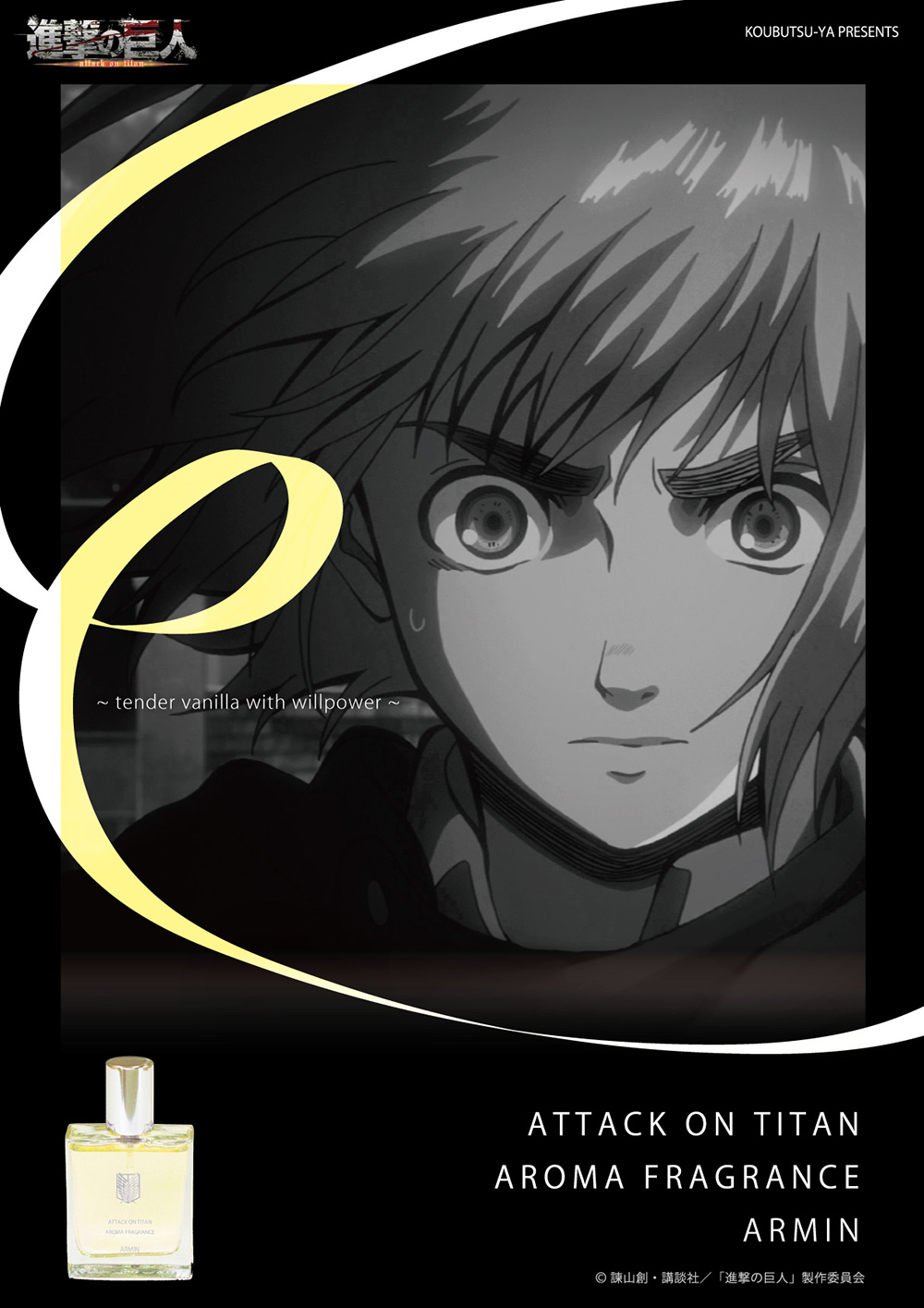 The next fragrance is an aroma of a fresh green and youthful wood of Jean Kirstein. A combination of orange citrus, bergamot, lavender, sandalwood and a spicy wood scent. Jean is a young energetic man who has witnessed the harsh realities and chose to fight, even though he questions his actions. 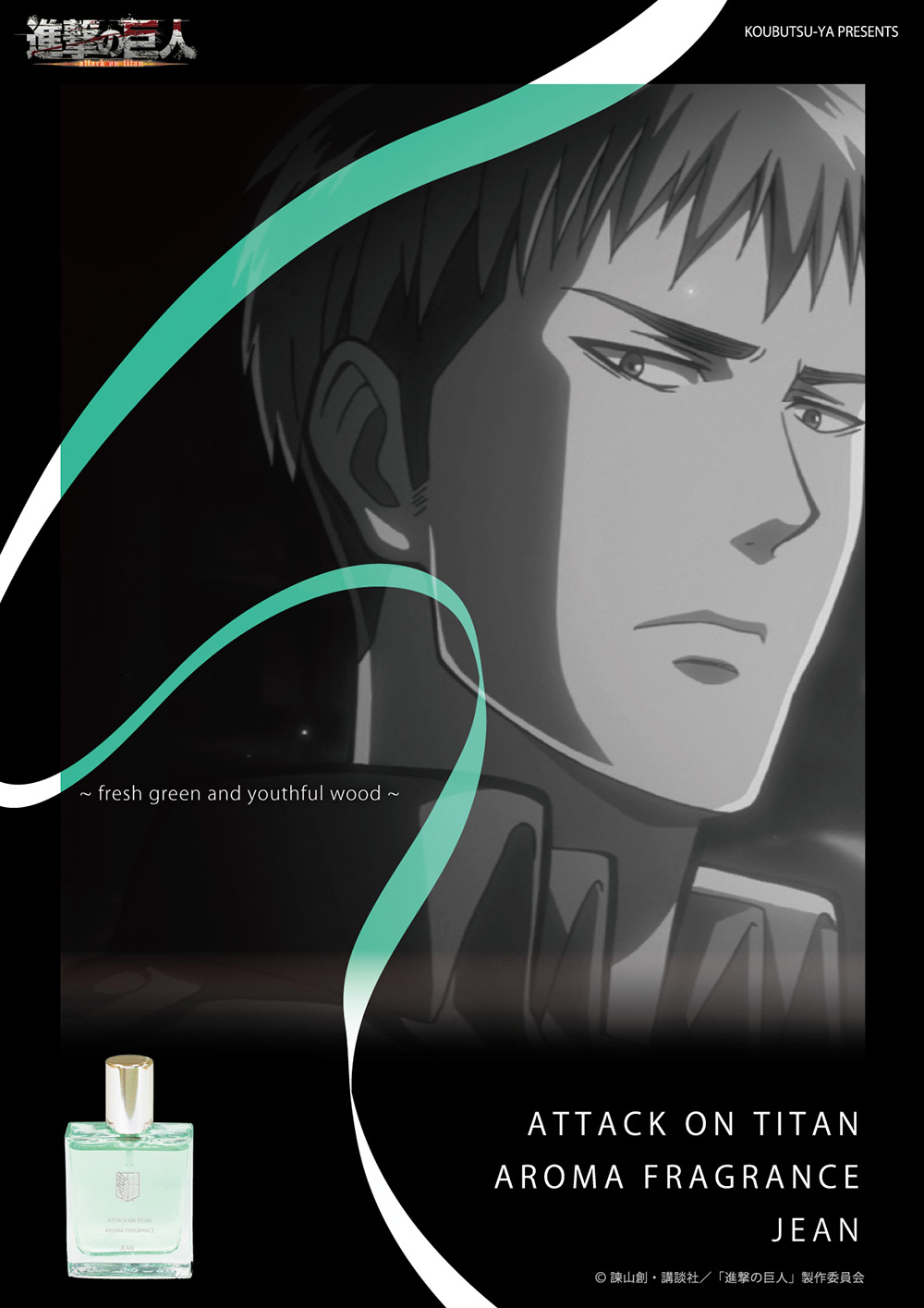 Hanji Zoe is the next fragrance described as bitter and mysterious herb. This aroma combination describes Hanji’s passion with expanding the knowledge of the titans, a complex mix of wormwood, citrus and floral, and a vanilla scent, rounding off the weird titan loving character. 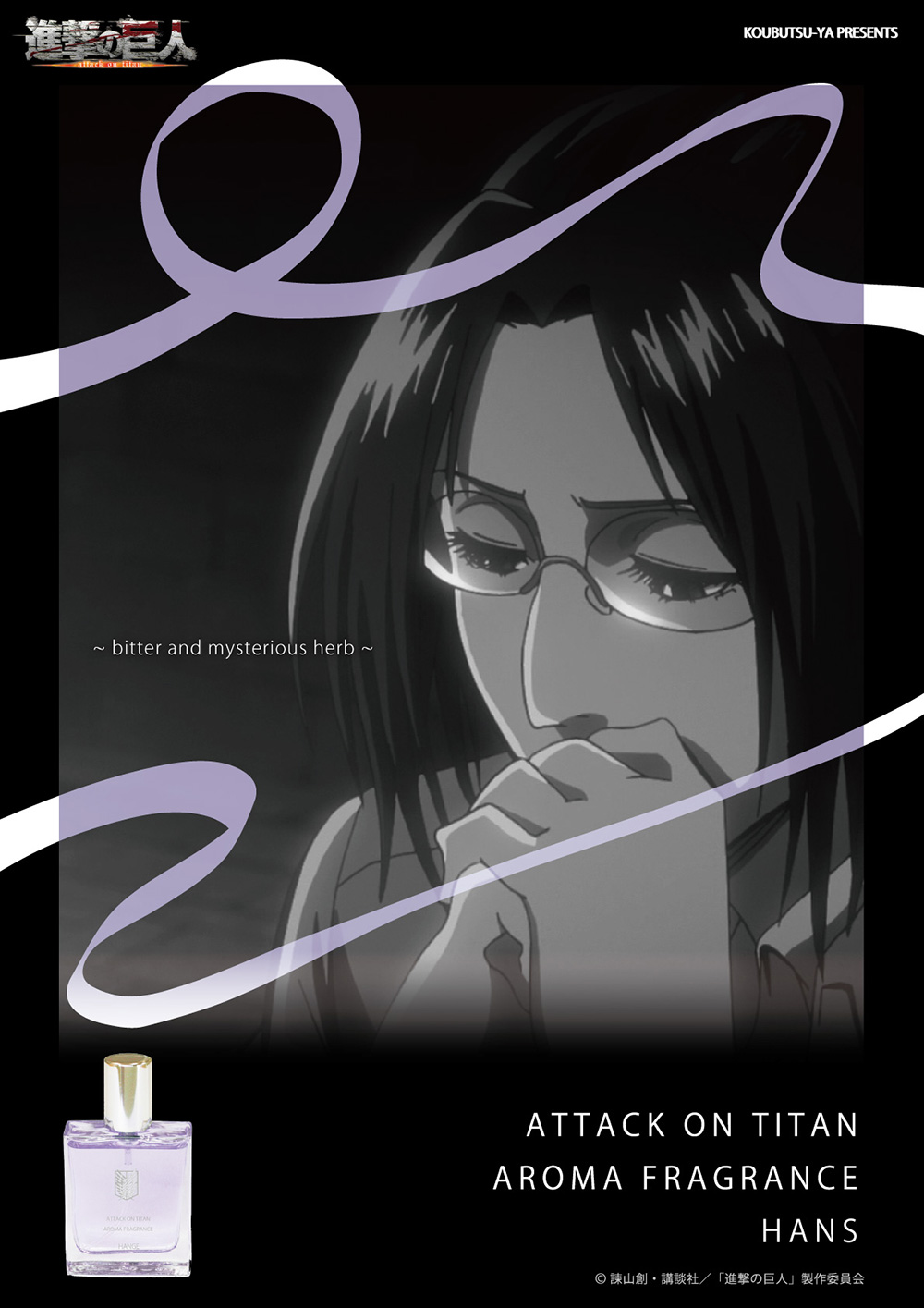 The final fragrance up for offer is of Erwin Smith, an aroma of a deep citrus and dandy note. This fragrance is of a deep woodlands scent, the smell of a strong adult, with deeper hints of rose, amber and spice. This expresses the depth of Erwin’s character and his coldheartedness. 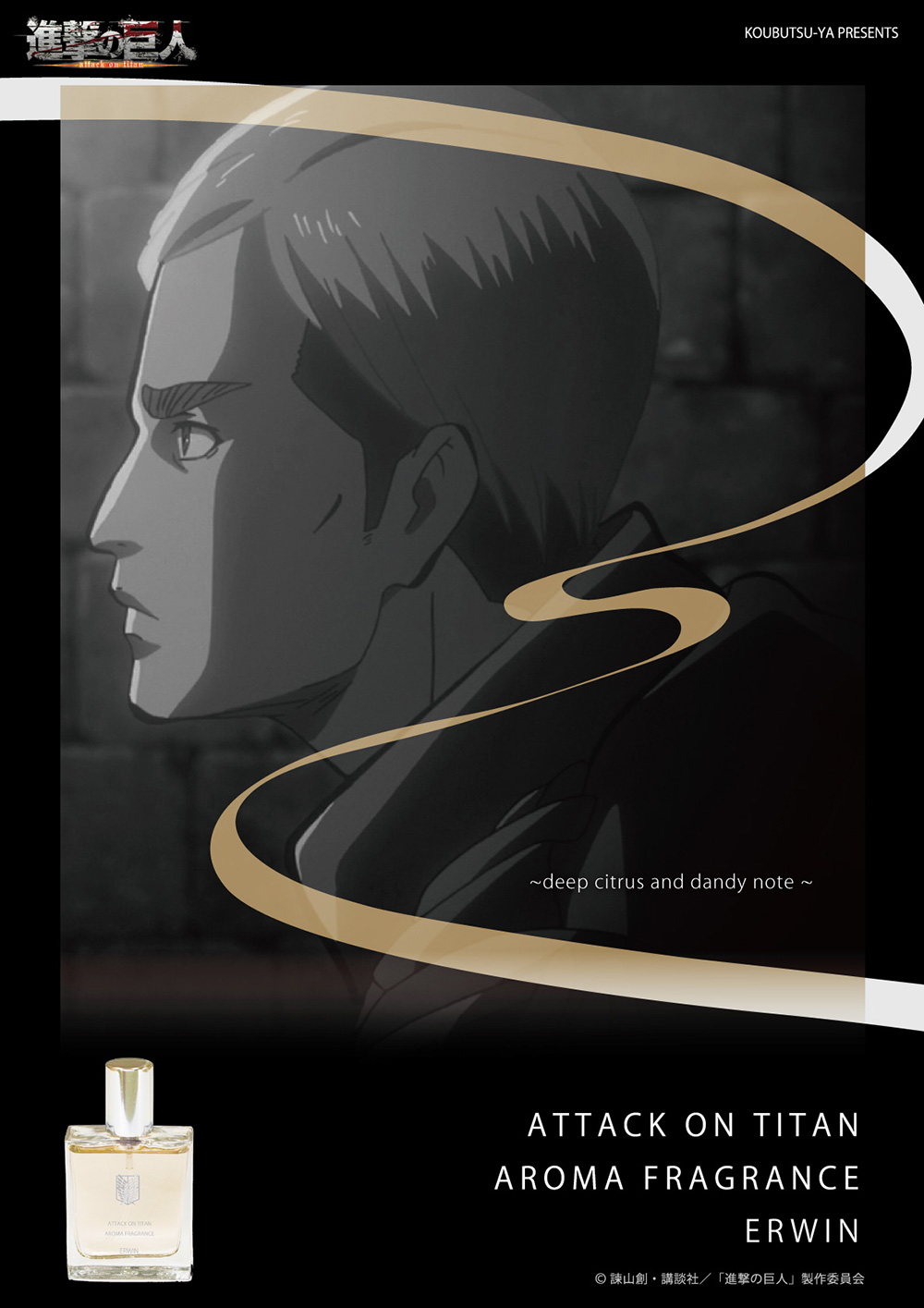 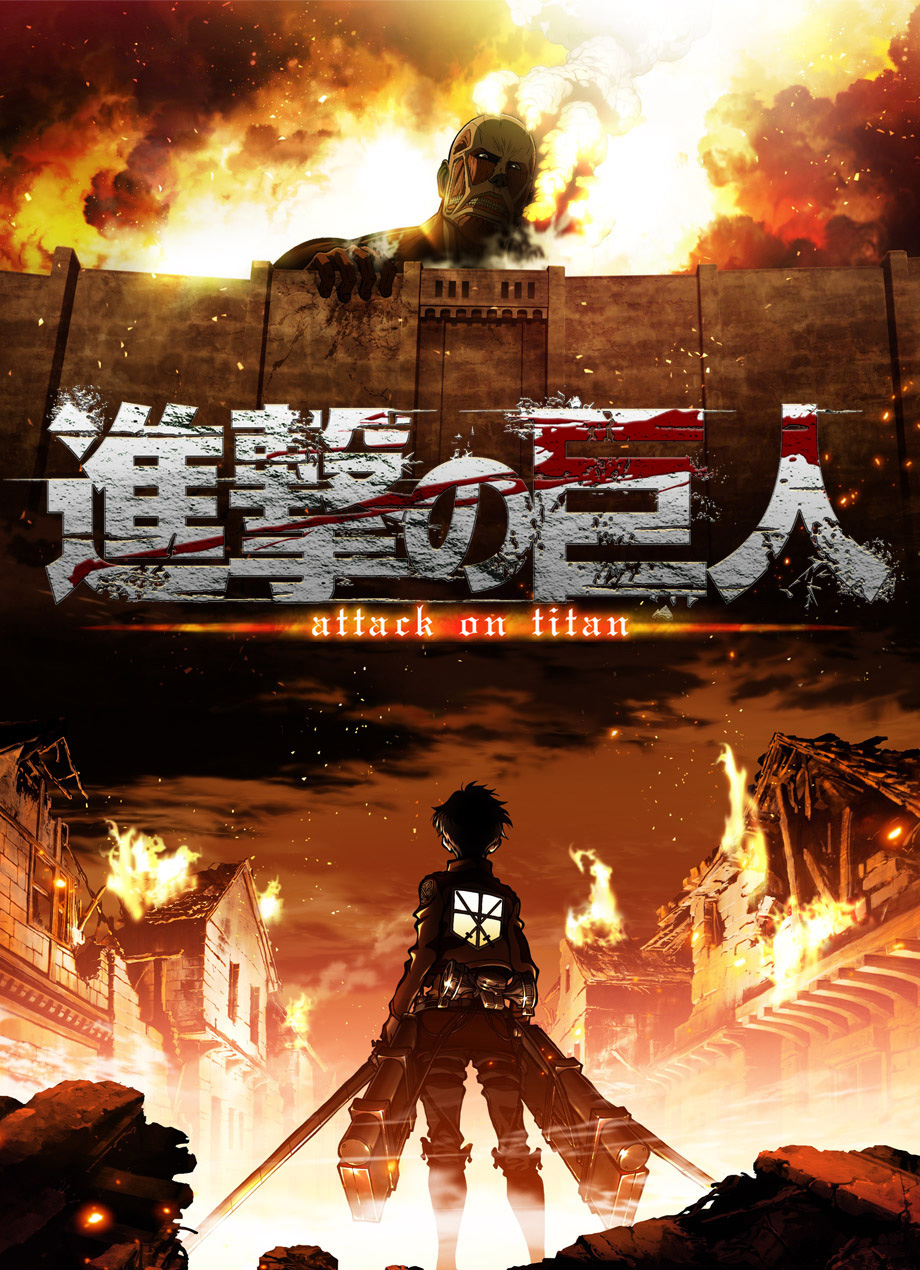 The Attack on Titan aroma fragrances by Koubutsu-ya are currently available for purchase. Each purchase will come with one bottle containing 30ml of your desired fragrance, with one bottle is going for ¥5,500 (~ $46.10 USD) before tax. You can visit the fragrances’ website here: http://koubutsu-ya.com/singeki/