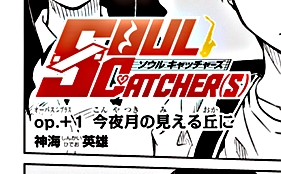 Today, Hideo Shinkai’s (Light Wing, Q Club) Soul Catcher(S) manga resumes on Shueisha’s digital manga magazine app, Shonen Jump+, after being transferred on May from the print magazine under the same publisher, Shonen Jump NEXT!!. This chapter features “Op.+1” and the next chapter is scheduled for August 9.  The manga will be releasing new chapters in the digital magazine every Sunday.

Synopsis of Soul Catcher(S) from MAL:

Shota Kamine is a boy who could “see” other people’s hearts. With this power, he tries to use it for the good of people, but nothing ever goes right. Not being able to sought out the meaning behind the power of his eyes, he becomes discouraged and loses all hope.

While then, on the school rooftop he meets a boy, Hibiki Tokisaka, and gets his own heart grasped by the sound of his saxophone!! Kamine who became interested with Hibiki, goes and visits the brass band’s concert. There, Kamine witnesses Hibiki’s performance shaking up and gripping the people’s hearts.

Hibiki, who had overcome what Kamine thought could never happen and not possible for him to even do, Kamine approaches him to talk about it, but to find out Hibiki too carry a dark past he cannot tell others. Kamine finds out his secret and he…