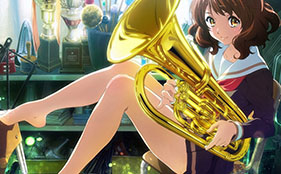 The official website for the anime adaptation of Ayano Takeda’s music genre novel series Sound! Euphonium has launched. In addition, character designs have been revealed, the first key visual has been previewed as well as the promotional video which was earlier revealed at the Comiket 87 event on Sunday. The anime is slated to air next April.