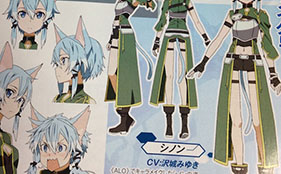 With the Gun Gale Online arc ending on the 14th episode of Sword Art Online II and the upcoming Calibur and Mother’s Rosary arcs on its way, the character designs for Shino Asada and Yuuki Konno have been previewed.

Aoi Yuuki (Couvert Eschenbach Pastillage from Dog Days’, Meme Tatane from Soul Eater Not!, Varel Jin from Blade & Soul) will be the voice for Yuuki Konno.

Yuuki Konno the leader of the Sleeping Knights guild:

Shinon’s reaction to her tail being pulled as a Cait Sith: