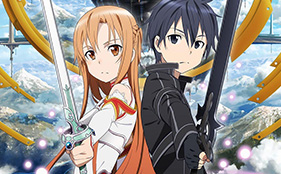 During a recent interview, Tomohiko Ito mentioned that the Sword Art Online Movie is currently being story-boarded and the completion of its scenario. He also explained that the movie will feature new characters, as well as ones periphery of the novels. In terms of the plot, he suggested that the story had echos of Avengers: Age of Ultron.

While the movie should please long-standing Sword Art Online fans, Ito says that it will also be accessible to newcomers. With a laugh he explained, they’ll laugh, they’ll cry, it’ll make a good date movie.

In addition to this, last December issue of Kadokawa’s Dengeki G‘s Comic magazine revealed that the upcoming Sword Art Online anime movie will be taking place after the events of the anime adaptation’s Mother’s Rosario arc.