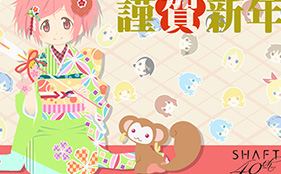 As Mahou Shoujo Madoka Magica prepares to celebrate its fifth anniversary in 2016, Studio SHAFT have updated their official website and greeted the Year of the Monkey with a new card and more art by character designer Junichiro Taniguchi.