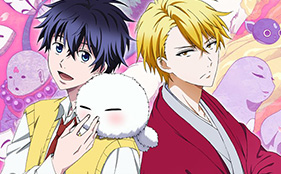 Square Enix launched an official website that has revealed that Kiri Wazawa’s The Morose Mononokean (Fukigen na Mononokean) is getting a television anime adaptation. The official website also revealed a new visual for the series, which shows the characters Hanae Ashiya, Haruitsuki Abeno, and Moja Moja. The Morose Mononokean (Fukigen na Mononokean) is a Japanese manga series drawn by Kiri Wazawa and has been serialized in Gangan Online since September 2013 with five volumes published. It is also currently being simulpublished in English as The Morose Mononokean by Crunchyroll since July 5, 2015.

The Morose Mononokean synopsis from MAL:

Ashiya has spent the first seven days of high school stuck in the infirmary because of a youkai attaching itself to him. He ends up asking the owner of a small tea room called the “Mononokean” for help. This is a tale involving the very morose owner of Mononokean guiding the youkai that happened to wander into this world go to the next world.