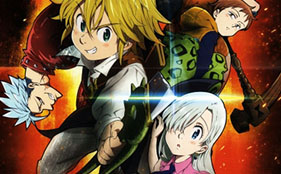 The second commercial for the upcoming TV anime adaptation of Nakaba Suzuki’s manga The Seven Deadly Sins has recently been uploaded. The anime series will debut this October and air throughout the fall 2014 anime season. The cast was also announced last week and can be seen here.