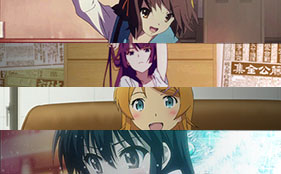 A recent survey on the female-centric Japanese website called My Navi Woman was held and they asked their readers: Who is the most tsundere girl in anime?

If you don’t know what a tsundere means, in general it is known to mean a character who alternates between acting mean or aggressive, and acting loving and kind.  It has taken a much broader definition however as it could also mean a person who has trouble expressing love and simply expresses it by behaving harsh or rude, or the original meaning of being a character who starts off mean but slowly becomes more loving and kind throughout the show.

8. Louise the Zero (Zero no Tsukaima)