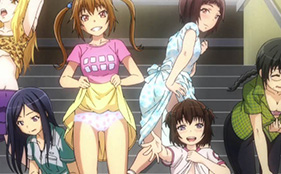 In the popular “nostalgic & innocent story,” Shouta Handa is sent back in time to his elementary school days via a mysterious school pool. He spots Konomi Harukaze, a girl who would eventually become a nationally popular actress, and other cute girls when they were innocent and defenseless.

The eighth manga volume will bundle the new OAD in a limited edition on August 28. The manga was previously adapted into an earlier original anime DVD. The DVD was bundled with the manga’s sixth limited-edition volume. Uran launched the manga in Hakusensha ‘s Young Animal Arashi magazine in 2011.

Shouta, a 25-year-old NEET, is mocked by his former female classmates who’ve all become successes, at their class reunion. A mysterious incident at the school pool throws him back in time and lets him deal with those same classmates back when they were fifth grade girls.