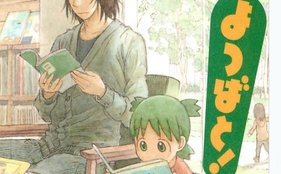 On April 24th, 2015, the official blog for Kadokawa’s manga magazine, Dengeki Daioh, announced their manga lineup for the next issue. In it, surprisingly, was a new chapter for Azuma Kiyohiko’s popular comedy manga Yotsuba&!. The last time Azuma published a chapter was eight months ago, in 2014. The sole chapter to be published that year was released in Dengeki Daioh’s October issue.

Yotsuba&! depicts the everyday life of a young girl named Yotsuba. A five year old adopted girl who is energetic, cheerful, curious, odd, and quirky, Yotsuba is so eccentric that even her own father calls her strange sometimes. She also happens to know nothing about various things children usually are well versed upon, including doorbells, escalators, air conditioners, and swings. Several characters in Yotsuba&! were previously featured in a one-shot manga called Try! Try! Try! The name Yotsuba&! means “Yotsuba and.” This could symbolize the infinite possibilities that Yotsuba can explore and experience, as right now, all she has is an open space. It could also be because all the chapters follow this title, as in “Yotsuba and [Content]”.

Yotsuba&! is an ongoing Japanese comedy manga series by Azuma Kiyohiko. It is published in Japan in the monthly magazine Dengeki Daioh, although issues have become rare in recent years. Collected in twelve tankobon volumes, the series has sold over 10 million copies in Japan. It first began publishing in 2003 and slowed down after the release of the 12th volume, in 2013.

The new chapter, chapter 89, will be released in the June issue of Dengeki Daioh, which ships on April 27th, 2015.