This year’s combined 36th/37th issue of Akita Shoten’s Weekly Shounen Champion magazine will be announcing on Thursday that the Yowamushi Pedal anime will get a compilation film which is slated for this fall. Yowamushi Pedal: Re:RIDE will compile the first half of the Inter High arc from the first television anime season with some cuts of new footage added. It will play in a limited two-week engagement from September 19 to October 2 in 10 Japanese theaters. While supplies last, each person who attends will receive one of 15 randomly distributed metal character badges.

Weekly Shounen Champion is also announcing that the upcoming second television anime season will have the title Yowamushi Pedal: Grande Road. The following cast and staff are returning from the first season: 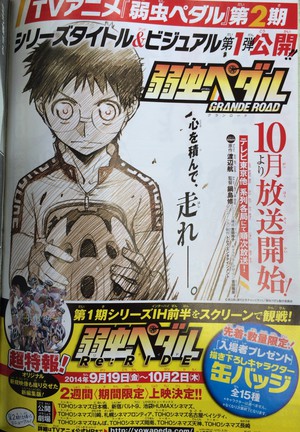 Weekly Shounen Champion is also announcing that the upcoming second television anime season will have the title Yowamushi Pedal: Grande Road. The following cast and staff are returning from the first season:

Yowamushi Pedal is a manga series written and illustrated by Wataru Watanabe. The series launched in 2008 and is being published in Akita Shoten Weekly Shounen Champion magazine. To date, the manga has released a total of 34 volumes. An anime adaptation of the series began in October last year and is scheduled for 38 episodes, ending on June 30. The series was animated by TMS Entertainment (Detective Conan, D.Gray-man) and directed by Osamu Nabeshima (D.Gray-man, Hamtaro).