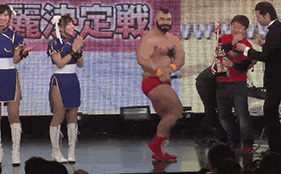 The contest hadn’t even started yet, but Shimizu was already the crowned winner.

Shimizu was supposed cosplay as Chun-Li, but since he’s a body builder, the rules were bent so they could get the okay for him to appear was as Zangief. Not only is Kayo Satoh is a terrific cosplayer, but she’s also a very talented Street Fighter player.

Mai Hino also performed the Spinning Bird Kick, but since she’s not much of a Street Fighter player, she accidently called it the “Spinning Bird Head.”

You can all understand why Shimizu won, right?

You can watch the full Street Fighter V event here: