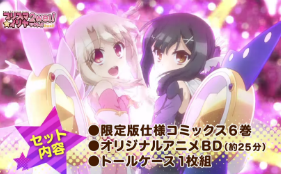 Type-Moon’s sixth Fate/kaleid liner Prisma Illya Drei!! magical girl manga volume which was going to be bundled with an original anime Blu-ray Disc, unfortunately will not be dispatched on April 25, but on July 25 instead due to “various circumstances” revealed by the Japanese publisher Kadokawa.

The publisher also streamed a trailer for the OVA in August, as you can see below.

The fourth manga volume bundled an earlier anime Blu-ray Disc, although it was similarly delayed from January 2014 to March 2014.

At AnimeJapan it was revealed that the main cast from the first series will be returning to Fate/kaleid liner Prisma Illya 2wei Herz!:

A brand new promotional video was revealed at AnimeJapan, which previews new scenes of the anime with the characters in their Summer outfits and also reveals that the main cast will return: