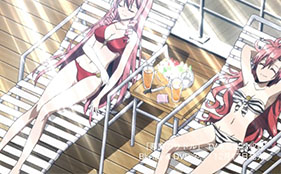 The official website for Akuma no Riddle anime has released the first promotional video for the upcoming unaired 13th episode. The unaired special will be released with the seventh Blu-ray/DVD volume. The special will also be previewed at a screening in Tokyo City on November 22, 2014. The 7th Blu-ray / DVD volume will be released on December 17, 2014.

As we mentioned earlier, the 13th episode appears to be a beach episode with all the girls ready in their bikinis / swimwear.

Akuma no Riddle is a Japanese manga series written by Yun Kouga and illustrated by Sunao Minakata. It started serialization in Kadokawa Shoten’s Newtype magazine with the September 2012 issue. An anime adaptation directed by Keizou Kusakawa and animated by Diomedea aired in Japan between April and June 2014. The Japanese title is a pun on Devil’s Trill by Giuseppe Tartini.

Akuma no Riddle synopsis from Haruhichan: