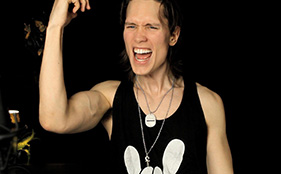 PelleK is a Norwegian rock and metal vocalist who covers a wide range of music genres on his YouTube Channel and on the 23rd of March he covered Aldnoah.Zero‘s third ending theme, “aLIEz” by SawanoHiroyuki[nZk]:mizuki:

and Nanatsu no Taizai‘s second opening theme, Seven Deadly Sins by MAN WITH A MISSION: