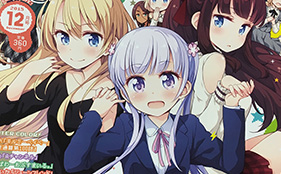 The December issue of Houbunsha’s Manga Time Kirara Charat magazine will be announcing on Wednesday that a television anime adaptation of Shoutarou Tokunou’s New Game! manga has been green-lit. The series itself features cute girls working in a video game company, in a similar fashion to Shirobako‘s depiction of working at an anime company.