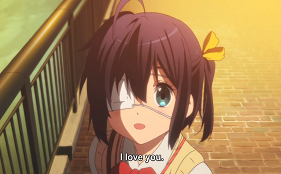 Terms – Chuunibyou: literally means middle school, 2nd grade (8th-grade) illness. It refers to people who have a wild imagination, and they believe they are someone else living in the real world.

When Kyoto Animation’s “Chuunibyou demo Koi ga Shitai” aired back in the Fall season of 2012, it turned out to be one of the most popular anime from that year. The show spawned specials, an OVA, ONAs, and even a movie that recapped the first season. After the final episode of Kyoto Animation’s anime “Tamako Market”, which finished at the end of March 2013, a fifteen second teaser trailer was shown with an ambiguous message that simply stated: “Contract renewed.” In May of 2013, the second season was confirmed.

Let me get one thing out of the way. I was a huge fan of the first season. I have a lot of love for Kyoto Animation, with them being my favourite animation studio. When the second season was announced, I was extremely excited, particularly because I was not expecting one. The first season wrapped up pretty nicely, and a second season had seemed improbable at best. As a more recent anime fan, and as someone who does not really pay attention to upcoming anime that often, this was the first anime I was truly excited to start watching.

The first season was characterized by its humour, quirky cast, and its awkward male and female protagonists: Yuuta Togashi, and Rikka Takanashi. It was a simple love story about a boy who knew nothing about girlfriends, and a girl who knew nothing but the world of her imagination. The humour left me in stitches multiple times, and I primarily call it a comedy anime more than a romance anime. Its character cast played off each other well, and their eccentric personalities only made the anime more enjoyable. So, how would the second season turn out?

The story takes place after the first season, and immediately follows the movie (knowledge of the movie is not required, but it does help explain the beginning of the first episode). Due to unforeseen circumstances, Yuuta and Rikka are living alone together in Yuuta’s apartment. As they start their second year of high school, and resume their club activities, their friends become frustrated at their apparent lack of intimacy as a couple. In addition, one of Yuuta’s childhood friends, Satone “Sophia Ring SP Saturn VII” Shichimiya, shows up to reunite with her old friend. Satone’s appearance tests the couple’s relationship.

With Yuuta and Rikka already in a relationship after the first season, this season should be about them making progress in their relationship. But, with such an awkward couple like this, their relationship moves at a snail’s pace. Prior to the start of this season, the closest they’ve gotten to each other in an intimate way was: hugging, holding pinkies, and a couple of failed attempts at kissing. It isn’t necessarily a bad thing that their relationship advances slowly, but it does make you want to scream at your screen a couple of times. However, when their relationship does move forward, it gives you this huge sense of fulfillment that a great task has just been accomplished. It is a bit hard to explain until you watch it for yourself.

Satone Shichimiya’s inclusion as the romantic rival actually does not even appear that way until near the end of the anime. As Yuuta’s friend from middle school, she has known him for much longer than Rikka has, including knowing how Rikka currently feels in her relationship with Yuuta. She, too, used to have feelings for Yuuta but gave them up to pursue her goal of being a chuunibyou forever. Her role as Rikka’s relationship advisor was done very well, and, I found, her overall portrayal was excellent. Despite her chuunibyou, she is a very down-to-earth girl underneath. However, therein lies my primary problem with the story.

The vast majority of the anime before the last quarter was focused primarily on humour with a couple of episodes focused on the story. The problem I have with that is that, since they focused so much on making us fall off our chairs in laughter, when it came time to focus on the story, they ran out of episodes to work with. My main gripe with the storytelling is how they told Satone Shichimiya’s story. They saved her arc until the last few episodes, and they seemed to really run out of time there. Her arc was resolved so unrealistically; it’s almost laughable. As I said, I primarily treat this series as a comedy more than a romance, but that still does not excuse the poor storytelling near the end. Although it could have ended better (I felt like I got trolled at the very end), it ended on a high note with the last episode.

All of the main characters from the first season return. Of course, there are the two main protagonists: Yuuta Togashi and Rikka Takanashi. Yuuta is a former(?) chuunibyou, but his interactions with Rikka has brought back some of his old habits. Rikka Takanashi is the main chuunibyou protagonist, usually spouting off quotes you would hear from 5th graders as they attempt to differentiate real life from fantasy. Throughout this season, she wrestles with her chuunibyou habits as she attempts to get closer to Yuuta. Makoto Isshiki, Yuuta’s classroom friend from the first season, is replaced by Satone Shichimiya as one of the main characters, and he is reduced to a supporting role.

Kumin Tsuyuri’s role was changed to make her the joker of the group, and she makes a bunch of plays on words during this season that will either make you laugh like crazy, or leave you bewildered because of the way the Japanese use puns. I, myself, am learning the Japanese language, so I understood some of her puns without the translations, and they are pretty funny if you understand the dual meanings of the words she uses.

The feuding duo of Shinka Nibutani and Sanae Dekomori, return to their antics of beating each other up and insulting one another. However, a couple of episodes focus specifically on the hidden friendship that the two have for each other. In all honesty, these two characters make an awesome duo when it comes to comedy, and they even managed to get some feels from me, which was unthinkable before.

I have already mentioned Satone Shichimiya and, in my opinion, she emerges as the best character of the anime. Around the halfway point, she starts to steal the show. She is unlike many other romantic rivals, in that she knows how wrong her love for Yuuta is, and she always represses her feelings for him inside her. You may think, that isn’t that unusual. What sets her apart is how she helps Rikka with her relationship with Yuuta. She gives advice to her and asks her if she is truly committed to her relationship with Yuuta. Satone faced the same dilemma in the past, and she wants to make sure Rikka is making all the right decisions. You often don’t see a love triangle where one girl is clearly helping the other girl get closer to the guy. She has a lot of depth to her character, and it sticks out amidst the other characters. Admittedly, when it comes to having well constructed characters, this series doesn’t have that. So that is why Satone Shichimiya came as a pleasant surprise.

These characters have such a great chemistry with each other. The way they all interact with each other clicks really well and it creates a solid cast. There were a couple of times where they could have developed the characters more, and that’s the only place it lost points for me. However, as a primarily comedic anime, it doesn’t matter much.

Kyoto Animation is well known for its moe art style as well as its great animation. It delivers on both once again. The thing I love about Kyoto Animation is its art style for sure, but they also work hard to create realistic backdrops for their scenes and they are just very appealing to look at. The backgrounds and characters are bright and vibrant, and it creates a very nice-looking world. The animation is great once again, and you can see it in the early chuunibyou fight scenes the most. However, I did notice it starting to falter in later episodes, particularly during the chuunibyou fight scenes. They seemed to lose the fluidity of the earlier fights. Regardless, overall, another job well done by Kyoto Animation.

In terms of sound, Chuunibyou Ren is pretty standard. No background music really stands out. There are some recognizable themes from the first season, like the background music for the chuunibyou fight scenes but, other than that, not much here. They all appropriately fit the scenes they’re placed in. The OP, VOICE, is done by ZAQ who also did the OP for the first season. It’s a pretty typical song, but I don’t mind.

The ED, Van!shment Th!s World, is done by Black Raison d’Etre, which is the main female cast and they also did the ED of the first season. I’m a huge sucker for electric guitars, so I personally really like this song.

The voice acting cast is pretty solid. Jun Fukuyama as Yuuta Togashi brings experience to this relative newcomer voice acting team. Maaya Uchida, again, nails her role as Rikka Takanashi to create one of anime’s cutest girls in history. I can see Chinatsu Akasaki as Shinka Nibutani going further in her voice acting career. I, for one, am hoping this is the breakout for Juri Nagatsuma, Satone Shichimiya’s voice actress. I already liked her voice acting from last year’s Tamako Market, where she voiced Kanna Makino, whom, coincidentally, was my favourite female character from that anime.

As a collective whole, I really did enjoy watching this anime. It delivered the expected humour I expected from it in spades, and it brought in the cute moe moments that only KyoAni can deliver. The ending was pretty good but, as I mentioned, it could have ended better. Season 3 potentially too? The author of the light novels has apparently written a new volume and will release this year. The way they left things could point to one.

Even though I had issues with the storytelling, as a comedy anime, this is still one of the best I have seen yet.  It left me in stitches a lot of the time with its ridiculous characters, well-timed punchlines, and characters’ reactions. The cast is fantastic and they have such great chemistry with each other. The art and sound are great as expected out of Kyoto Animation. If you want an amazing love story, then I’m afraid you’ll have to settle for a just a good one here. However, if you were a fan of the comedy of the first season, or love humourous anime combined with great characters, then this is for you.

If you have watched it, what do you think of it? Let me know in the comments below!