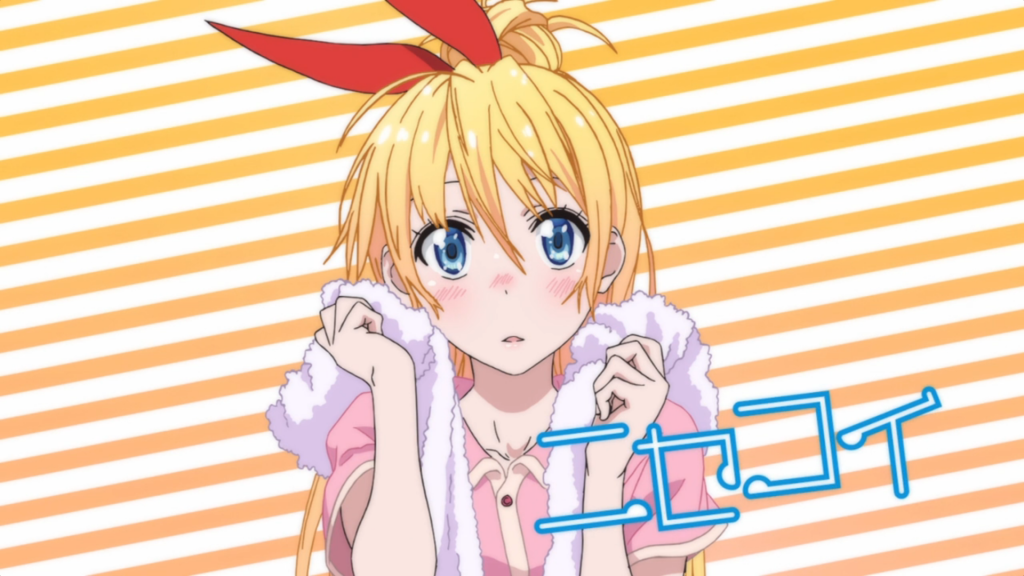 One of last season’s most popular anime was Nisekoi. It’s based off the extremely popular manga of the same name. For the first time, I got caught up in the hype for an anime, since a lot of people I knew were talking about it like it was a big deal. It’s within my usual comedy/school genre so I figured I might as well give it a shot and see how I like it. I only watch anime, so I had no knowledge of the manga going into this.

Nisekoi’s story revolves around Raku Ichijo, the heir to a yakuza gang. One spring day, he gets tackled by Chitoge Kirisaki and he loses his prized pendant. A girl had given it to him ten years prior to the start of the anime as part of a promise, to meet again in the future and unlock the lock on the pendant together. Raku forces Chitoge to help him look for the pendant and the two of them clearly do not mix well together. After finding it, Raku goes home and realizes that his gang is about to enter war with a rival gang that had just moved into town. His father and the rival gang’s leader would prefer to avoid a gang war, and they propose that Raku go out with the rival gang leader’s daughter so the gang would avoid conflict. Raku agrees… until he learns that the rival gang’s daughter is Chitoge. However, they both realize that it would be bad if there was a gang war in town, so they agree to fake their love for each other. However, Raku has a crush on his classmate, Kosaki Onodera, which complicates things for him since they must pretend to be a couple full time to deceive any gang members that might be watching. Kosaki also carries a key that she had carried around with her for the past ten years and she believes Raku is the boy she made the promise with. However, Raku does not remember anything about the girl he made the promise with.

The story doesn’t seem too bad at first. The fake love part, and the promise that Raku seemingly made with Kosaki all those years ago, make for an interesting premise as the three of them try to figure out the situation they’ve been placed in. Raku has to pretend to date Chitoge, but he also wants to get closer to Kosaki since she is his longtime crush. This leads to hilarious situations as misunderstandings happen all the time. However, after the pace of the story slows down, they introduce more girls to spice things up. After this happens, the plot devolves in a typical harem fashion where all the girls fall in love with Raku, and he has to split his time between them. After a while, the plot becomes more slice of life-like than anything as he gets put into different scenarios with the girls. In addition, the plot loses a lot of relevance around the halfway point. The story is almost negligible by the end of the anime.

Nisekoi does nothing to break the traditional harem story formula. It feels like a literal copy and paste from any harem story ever told in anime. The story had a great premise at the beginning, but it ultimately fades into the background. It’s a shame, because I was really hooked on it at the start.

In most harems, the story is usually already considered a write-off so you have to hope for good characters to back up the plot. My feelings for the characters of Nisekoi are mixed. The females of Nisekoi feel like they were taken out of an anime cliche textbook. Think of every single female archetype in anime. Now take the basic traits of those characters, and apply them to the girls in Nisekoi and there you have your leads. You have your tsundere lead heroine (Chitoge Kirisaki), incredibly shy childhood friend (Kosaki Onodera), cool tomboy (Seishirou Tsugumi), and yandere-like rich girl (Marika Tachibana). These have to be anime’s biggest female character cliches, and it’s as if the writer made all these characters this cliche on purpose.

Thankfully, these girls are done better than most other cliches of this type. All of the girls get proper backstories, and they all relate to the past and how Raku met them ten years prior to the beginning of the anime. The girls develop fairly well, and they’re all fairly believable. You’re bound to have a favourite by the time the anime is over. However, while the girls are done well, Raku feels like he’s just there to be the girls’ romance interest. All Raku is, is your stereotypical nice guy that somehow manages to get girls to like him. This wouldn’t be so bad, if he wasn’t as dumb as a brick. There is nothing special or interesting about Raku to make you feel anything for him, except perhaps frustration as he can’t find a way to get with any girl. In my opinion, Chitoge Kirisaki is the best character to come out of this anime. She is the only character that really develops, like a tsundere should. The supporting cast, namely Shu Maiko and Ruri Miyamoto, help keep thing humourous, and they also help push the characters closer together on occasion.

The characters of Nisekoi are the embodiment of cliche characters. Despite that, they still manage to find a place in your heart because of the way they’re presented and developed.

The art of Nisekoi is very appealing to me. They use a lot of over exaggerated facial expressions for the characters’ reactions, and it helps make the jokes even funnier. As for the art style during regular scenes, it’s a slight departure from Shaft’s typical style. Admittedly, I haven’t watched many Shaft anime, but it’s different from the ones I have seen. They put in a ton of blushing scenes of the girls to help you get attached to them, and the way they portray them is funny and endearing at the same time.

The animation is more of what you would expect from Shaft, head-tilts included. The animation quality is pretty high as is expected from Shaft. However, sometimes it seems like the characters mouths are moving faster than the words that are coming out of them and it can be a little distracting. Other than that, there are no problems.

The voice acting and music of Nisekoi is its strongest point for me. Put in some of my favourite anime voice actresses, alongside my favourite Japanese music group doing the openings, and you got me hooked right away. Part of the reason why I started Nisekoi was because of this. Kana Hanazawa playing Kosaki Onodera, and Kana Asumi doing the voice for Marika Tachibana got me in almost off that alone – she’s been one of my favorite voice actresses ever since I heard her voice in the game Fire Emblem: Awakening. Put in ClariS doing the opening songs, and I was in. It’s bittersweet knowing that this is going to be the last anime that ClariS is going to do songs for…

The talent of Kana Hanazawa to create absolutely adorable girls shines through again. She truly makes Kosaki Onodera. I feel Kana Hanazawa was the perfect fit for Kosaki. Nao Touyama playing Chitoge Kirisaki deserves attention, and I hope she becomes more popular because of this anime. I already liked her performance of Chiho Sasaki from Hataraku Maou-sama!, and I would like to hear more from her in the future. Kouki Uchiyama as Raku Ichijo is a rising star, and he did a nice job with his character. Finally ,I would also have liked to hear more from Mikako Komatsu as Seishirou Tsugumi because she is starting to really emerge as a good voice actress.

The openings of the anime, CLICK and STEP, were both done by ClariS. ClariS is my all-time favourite Japanese group. Clara and Alice, the singers of ClariS, have great voices and they’re both talented. You probably would have never have guessed these girls are in high school if you listened to any of their songs. Both songs are composed by livetune, and both songs are done very well. STEP is probably my favourite opening this season based off the anime I am currently watching. STEP may even be my favourite ClariS song, which makes me even more depressed that Alice is “graduating” from ClariS. The endings are all character songs, done by all of the female leads. “Heart Pattern” by Chitoge Kirisaki, and “リカバーデコレーション” (Recover Decoration) by Kosaki Onodera are the longer running ending songs, followed by “TRICK BOX” by Seishirou Tsugumi and “はなごのみ” (Hanagonomi) by Marika Tachibana. I like all of them, with Heart Pattern probably being my favourite.

The background music contains a couple of good tracks, but otherwise doesn’t stand out much. Overall, the music and voice acting is very well done.

Nisekoi was a very enjoyable anime for me, despite the cliche story and characters. The humour of the anime kept it extremely enjoyable, and you always looked forward to the next uncomfortable situation or misunderstanding. The characters’ reactions are really funny and their facial expressions just make it even better. 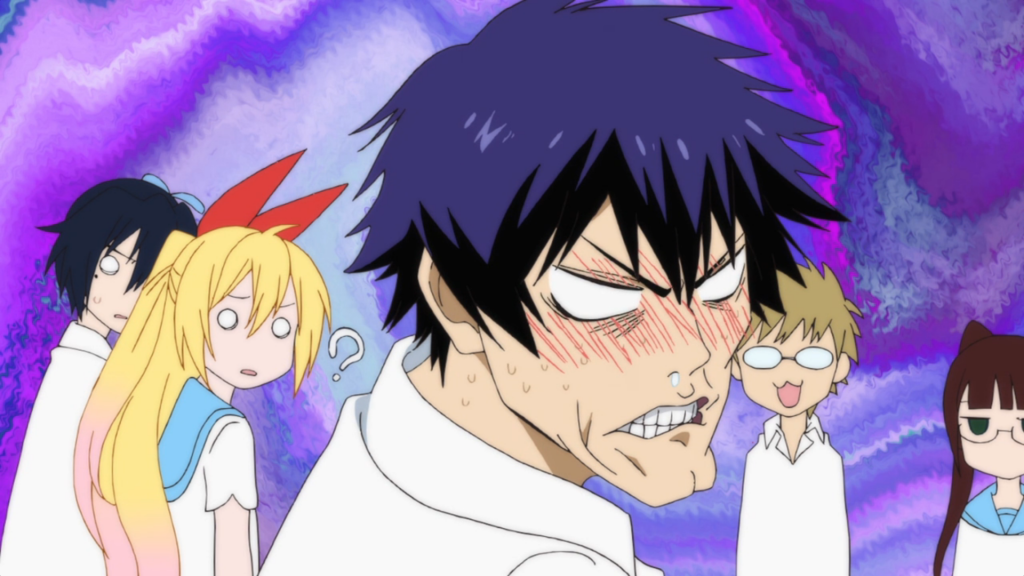 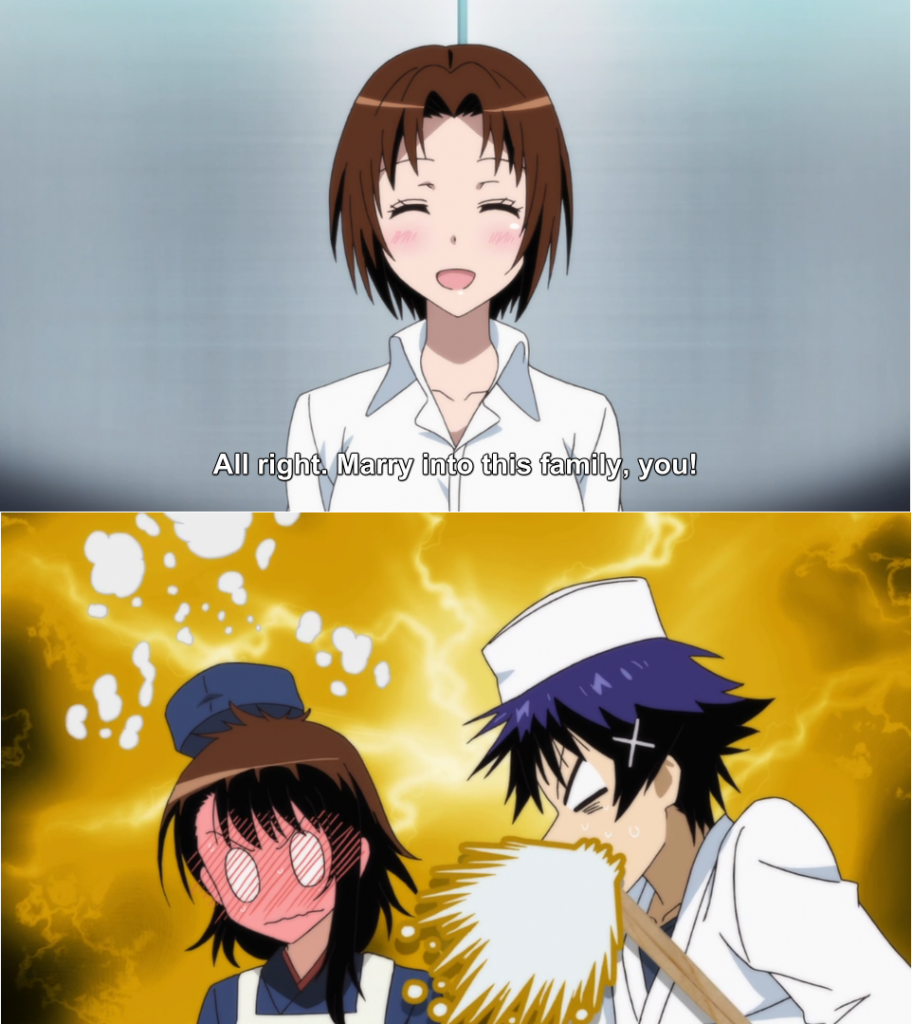 I always looked forward to each new episode every week, and I would try to watch it as soon as I possibly could, because I knew I was going to get some great comedy. As I also mentioned before, the characters were also a big part of what makes the anime so enjoyable. They’re predictable, but it all works together.

If anyone ever wonders what a basic anime rom-com is like, you might as well point them in Nisekoi’s direction. It contains a ridiculous amount of rom-com cliches from its overall story, to its characters. However, it still manages to shine, despite all the blatant stereotypes. The story starts off interesting enough to get you hooked, its characters are endearing, sound is great, Shaft’s quality comes through, and it delivers on comedy. If you can handle the predictability of the anime, and knowing pretty much everything that’s going to happen when it comes to story and characters, then give it a watch.

+ Interesting story at the beginning

+ Openings, endings and the voice acting were very well done

+/- Story and characters are extremely cliche, but done better than most

– Story takes a severe downturn in the second half

So, what did you guys think of Nisekoi? Comment below and let’s get a discussion going!