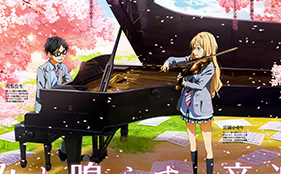 Manga artist Naoshi Arakawa, has become a confirmed guest by the Anime Expo staff on April 6 for the expo in summer of 2016.

Arakawa is the artist behind works such as his debut Tsumetai Kousha noToki wa Tomaru (The Time Stops on a Frozen Campus) in 2007, Sayonara Football in 2010, and his most renowned work, Shigatsu Kimi no Uso (Your Lie in April) from 2013.

Currently, he is working to launch a new series in Monthly Shonen Magazine.

His work, Shigatsu Kimi no Uso, has been adapted into an anime, and not only won a Kondansha Manga Award, but was also made into a live action movie that is scheduled to released in late fall of 2016.

Big fans of his work will be excited to see him in person at the Expo that takes place the first week of July 2016. Details on days he will be appearing as well as possible panels and meet ups are not yet announced.