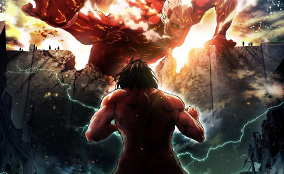 The official website of the anime adaptation of Hajime Isayama’s Attack on Titan (Shingeki no Kyojin) manga has revealed that the upcoming second season will air in Spring 2017. The first visual was revealed, alongside the announcement that the cast and staff will return – however a new director will take charge.

The Spring 2017 anime season will begin in April next year. It was earlier reported that the anime has been delayed to 2017, despite having a 2016 expected broadcast when it was first announced.

The site has revealed that the main cast of the first season and the spin-off will return for the second season:

The second season of the anime was first revealed at the premiere of the Attack on Titan: Crimson Bow and Arrow (Shingeki no Kyojin Movie 1: Guren no Yumiya) compilation film last November. The premiere also revealed the release date for the second compilation film, Attack on Titan Part II: Wings of Freedom (Shingeki no Kyojin Movie 2: Jiyuu no Tsubasa) which aired in Japanese theatres on June 27th this year.