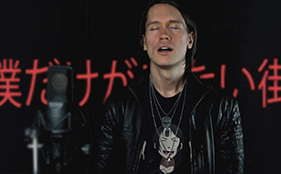 He recently covered Death Note’s opening, “the WORLD” by Nightmare.

The opening theme for Noragami Aragoto, “Kyouran Hey Kids!!” by THE ORAL CIGARETTES.