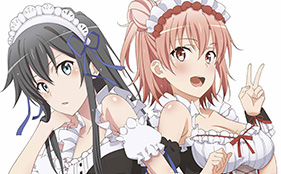 The official website for the anime adaptation of Wataru Watari and Ponkan8’s Yahari Ore no Seishun Love Comedy wa Machigatteiru. (My Teen Romantic Comedy SNAFU) light novel series revealed on Friday that the seventh and final Blu-ray/DVD volume has been delayed from January 27 to April 28 due to production issues. The website also reported that the text story bundled with the seventh volume will be several times longer than the text stories bundled with the previous volumes.

In addition to this, the first volume of the Blu-ray was released on June 24 and a total of 8 outlets will be offering special illustrations, which may come as an acrylic board, box cover or special sleeve. In order to receive the bonus illustrations, you will have to order all 7 volumes of the Blu-ray from the respective outlets. They include: