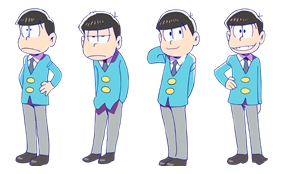 The official website of Osomatsu-san updated with more cast and character designs per day since Tuesday for its Fall 2015 anime premiere. Just few days ago, an anime sequel for a 27-year old anime, Osomatsu-kun, has been announced.

Other characters without voice actors yet:

The prequel of the anime was aired with 86 episodes on February 13, 1988 to December 30, 1989 titled as Osomatsu-kun. The manga was published with 34 volumes under Shogakukan’s Weekly Shounen Sunday magazine from 1962 to 1988. This Fall 2015 anime will be about Osomatsu-kun on his adult years.