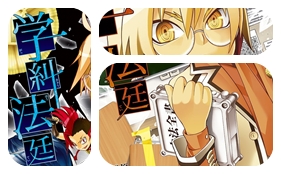 Nobuaki and Takeshi released the manga under Shueisha’s Shuukan Shounen Jump magazine on December 1, 2014. The manga ended on May 27, 2015 with 22 chapters total and 3 planned compiled volumes. Currently there are two Japanese volumes of the manga. The first volume was released on May 1, 2015, the second is planned to ship on July 3, 2015. The third volume is slated to be published on August 4, 2015.

As problems continue to plague the elementary school system, a new solution is enacted in the form of the School Judgment System! Now the young students themselves will be responsible for solving the issues that befall them! But are they up to the task?