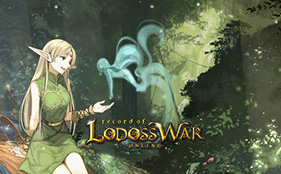 For those unfamiliar, The Record of Lodoss War is a series of 8 fantasy novels, which originally ran from 1988-1993. The series originated from “replays”, or written transcripts of Dungeons and Dragons sessions. After his transcripts gained popularity, series creator and dungeon master Ryo Mizuno began to adapt the stories into a series of novels.

There have since been dozens of manga, anime and video game adaptations of the franchise, including a full 27 episode TV series.

The Record of Lodoss War Online is the newest adaptation of the franchise, and is being developed by Red Stone’s L&K Logic Korea and released by GameOn. After it’s initial announcement in 2013, the game was seriously delayed after initial alpha testing.

Now, L&K Logic is re-opening premium closed beta to further development, and in anticipation of it, have released the character designs and voices for various NPC heroes and villains. With retro graphics and classic RPG gameplay, the MMO hopes to also cater to older fans of the series. The fre-to-play MMO’s story will be based around The Record of Lodoss War 1: The Grey Witch arc, and will progress further into the story in future content updates. Premium closed beta will re-open on Febuary 16th, and the game is set to release some time in 2016.