In the western world the sheer amount of fan created material for anime is staggering, and it affects our perception of shows, characters and other aspects of anime as much as the original work. It is similar to the Japanese doujin culture, but for a different purpose. Now, when I say ‘doujin’ this isn’t referring to—as many people think—just fanmade comics or hentai/porn, it extends to fanart, music, mashups, AMVs, games created and even fansubs themselves. Yes, other fandoms and cultures have small elements of these, but the thing I appreciate the most about anime is seeing the many diverse ways we—as westerners—incorporate own culture into anime that forms a global understanding of such a regionalised medium.

Firstly we need to look at the genre/medium codes that anime employs, before we can see how what is alien is put into familiar contexts. There is of course the art style with often over exaggerated features such as eyes, unrealistic hair, usually much brighter than western animations and it has a distinctive tone to the artwork. There are also the Japanese cultural norms that anime is filled with that often take a little bit of background knowledge to understand—an example could be how two characters that are familiar but not close would address each other by their family name, not their given name. These cultural aspects can be very alienating and unapproachable; consider holding out your hand for a handshake to an alien or foreigner and them not knowing how to respond.

In most other mediums that WANT to be globalised, such as latin-American telenovelas, shows are entirely remade—Ugly Betty being the best example—that address these cultural inconsistencies for each audience. There’s a bunch of different versions of Ugly Betty; they’re all shit, but they edit their cultural normalities in geographical context. Anime doesn’t have this luxury. Dubs don’t come close to this level of re-identification. So what do we do to make characters more accessible, westernised and lovable? Apparently we butcher them into our own culture to create reference points of understanding of what we—as a community—want from characters.

One of the ways this is done is through music, such as what I have called “moeswag”—anime/rap mash-ups that have become quite prolific on YouTube in recent times. You wouldn’t normally associate artists like Busta Rhymes, Tupac or Jay-Z with the word “cute”, in fact they’d probably be better termed as “assholes” or, more politely, “thugs”. Which is precisely why they are the perfect point of reference to examine exactly how “moe” an anime song or character can be. I mean, something looks whiter when its next to something black, right? You know, like Eminem. Same concept is going on right now when you listen to something as baller as “Black and Yellow Sketch” or “ZZZ Like its Hot.” This form of doujin culture is reasserting the control over anime—globalising it—and making it our own, repurposing it with our own understandings.

The character of Mugi from K-On! is the best demonstration of this concept in action. She is, above all else, a tea drinking, cake eating, wealthy, well to do keyboardist.  This something that Japanese culture is relatively familiar with. But outside of good ole Britannia, are there many of those types of girl around? No. So what context can we put her in as a character to define what she means to us as a western audience? Well, it’s pretty easy to understand the gentle nature of eating cake and drinking tea when it’s compared to popping caps in asses and brutal violence of various natures.

Effectively, anime is one of the first region-specific mediums to find a global presence and the way this is happening through digital mediums con-currently is astonishing. This generation is all about co-creation, but the anime community is doing so much more; the medium is being globalised in real time. From the fansubbers, to the mash-up artists, the AMV makers, fanartists, even the reaction image creators: you guys are as much the identity of the anime you watch for western audiences as the original product.

And here’s my contribution: 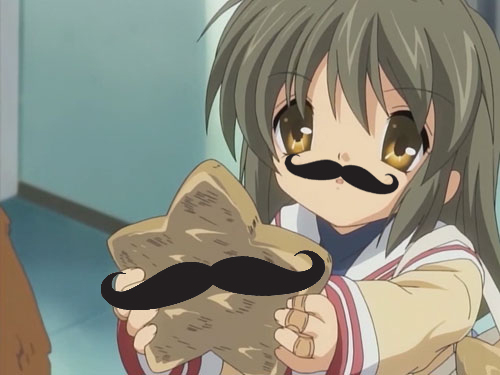