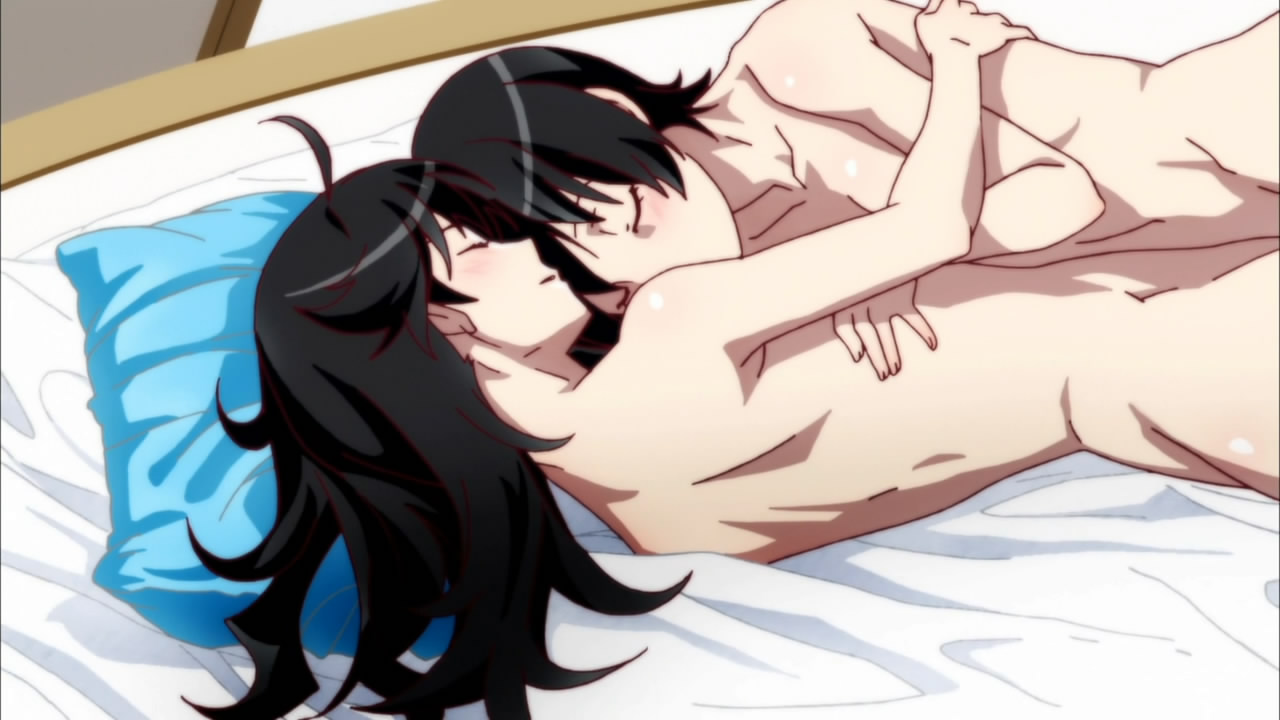 Let’s switch subjects for a moment. Let’s change our talk to Bakemonogatari. Bakemonogatari first came to my attention after seeing some random pictures from various anime forums. It was highly recommended and it seemed like something I would be interested in. However, I become really lazy when it comes to downloading new anime. I already had a big backlog and this was only going to add to it. After downloading Bakemonogatari, it sat in my backlog for a couple of weeks before I finally gave the first episode a try. My first impression? It sucked and I dropped it. 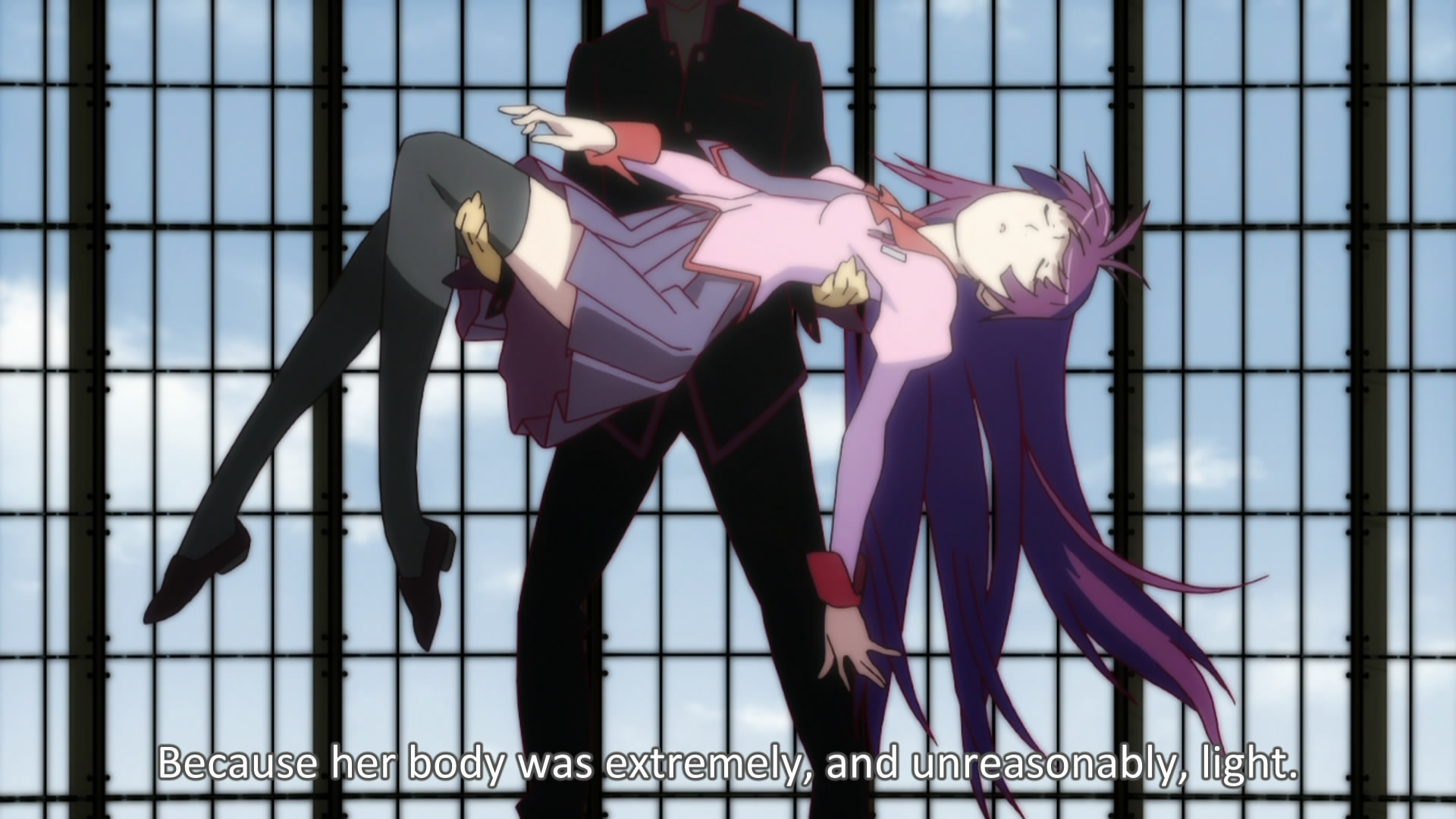 This made it very easy to drop.

Time went by and Nisemonogatari came and went. I was mildly interested in the Nisemonogatari threads, but in the end I rarely visited them and when I did, I ignored most of the posts in them. Without out seeing Bakemonogatari, I felt that Nisemonogatari would be completely lost on me. About a couple of weeks ago, I finally decided to try Bakemonogatari again. At the very least, I would try and make it through the first episode this time. When the familiar flashing scenes started, I paused the episode to read whatever it said. This is what actually attracted me to keep watching Bakemonogatari. All the cards and the flashes of animation were amazing. It wasn’t overwhelming like it was the first time I watched the starting episode. I made it through the first episode with much more interest than I first had. I needed to see another episode. This pattern would repeat as the arcs just got better and better. Episode 12 would be the episode that finally cemented my love for Bakemonogatari. 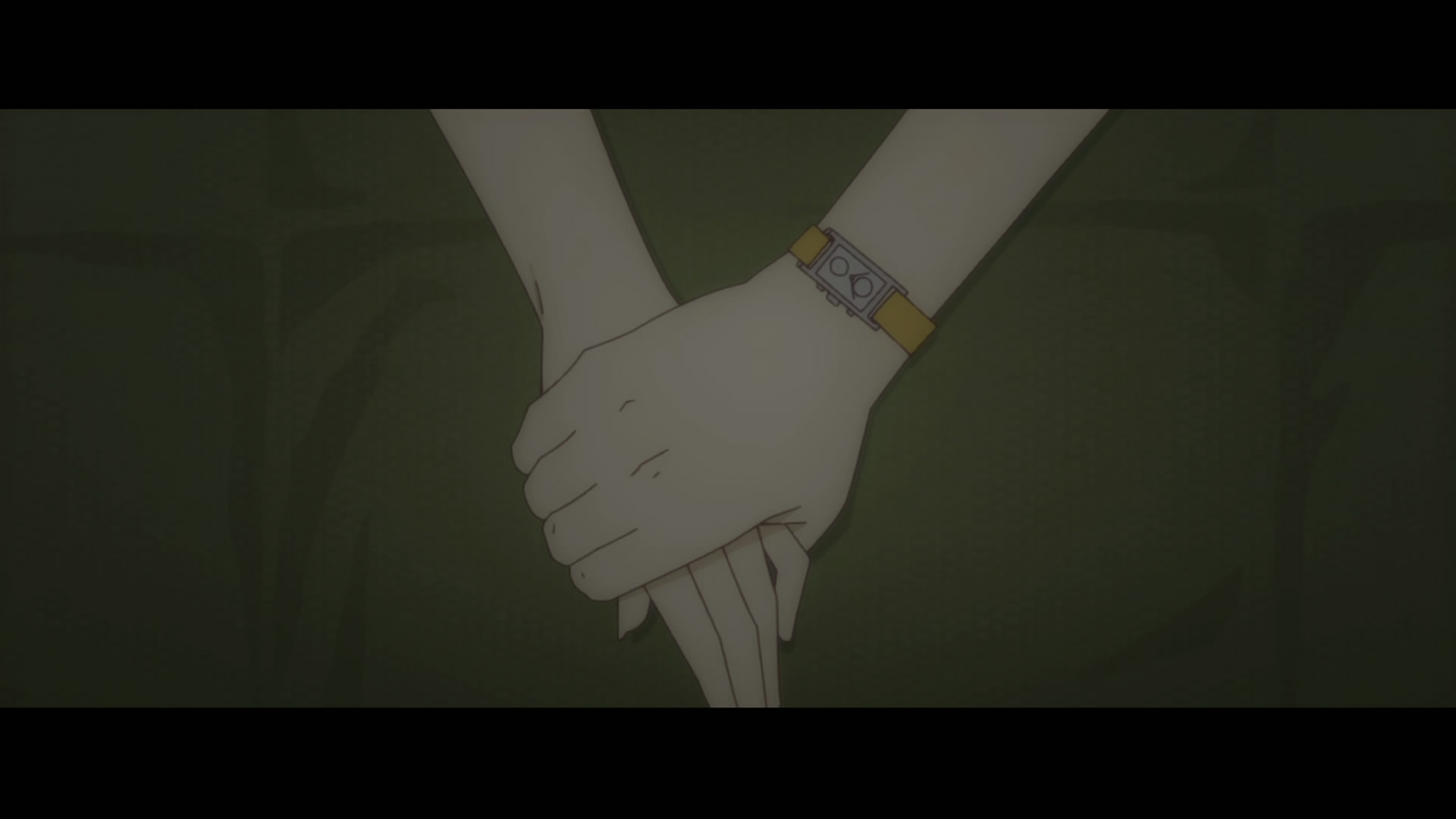 This image might be a little lewd for our younger viewers.

Upon finishing the series, I immediately started watching Nisemonogatari. The only major complaint I had with it was that the first arc was called, “Karen Bee”. Personally I think the title, “Koyomi dicks around for a couple of episodes” would have been a much more appropriate title. However, I did enjoy Nisemonogatari very much. I didn’t find myself at all bored with any of the scenes. In fact, I believe I knocked out Nisemonogatari in one day. I just couldn’t get enough of it. In the end, I’d have to say that Bakemonogatari was a bit better, but I believe that’s the favored opinion among many fans of the series unless you’re one of those people who’s into incest. 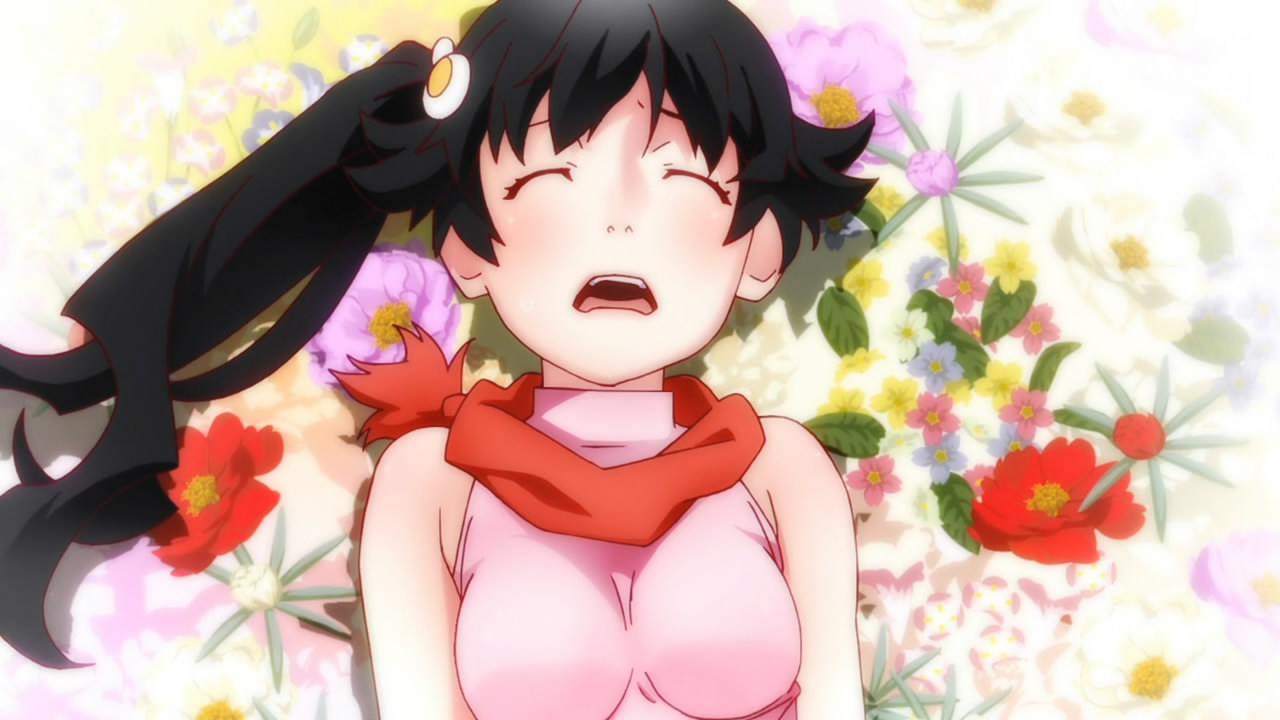 I’m really quite glad that I don’t watch anime with my sisters.

If there was one complaint I had in the entire series, it would have to be about Koyomi. He gets his ass kicked way too much. It’s like he can’t even fight back against the simplest of opponents. His sister even sends him flying through concrete. Did becoming human again make him completely retarded when it comes to fighting? It’s like the only good thing he retained from being a vampire was his ability to be a human punching bag. Even that really cool eye sight doesn’t show up more than once. His arms break as if they were nothing, he bleeds as if he was a hemophiliac, and he gets knocked around as if he’s lighter than air. It’s actually kind of depressing when you see him fight in the opening of Bakemonogatari. He looks like a complete badass when fighting Kiss-Shot-Acerola-Orion Heart-Under-Blade. In Bakemonogatari? He’s a complete pussy. In Nisemonogatari? He looks cool for about one moment before getting completely shut down. This is one of the reasons why I’m really excited for Kizumonogatari. I want to see Koyomi fight. I want to see him kick some ass. Sure, I understand that he’ll probably get his ass kicked in most of the movie, but for one moment, just one moment, I’ll see the badass moment I hope for. 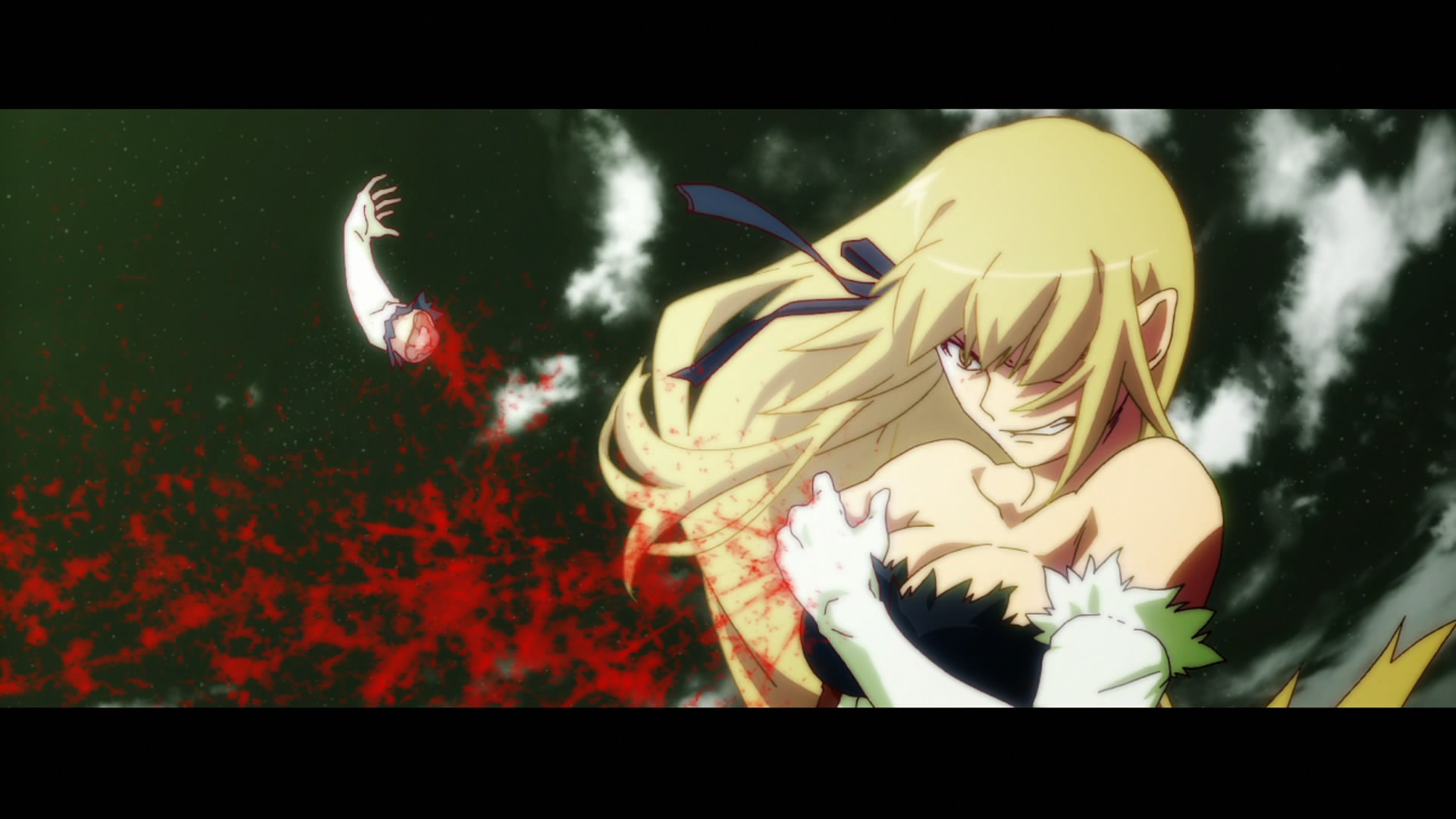 Is it bad that I get excited at the prospect of a High School boy cutting off the arm of a 500 year old vampire?