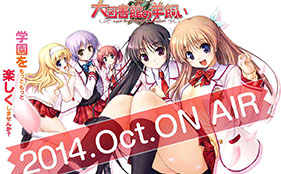 The promotional video for the the upcoming TV anime adaptation of August’s adult PC game Daitoshokan no Hitsujikai (A Good Librarian Like a Good Shepherd) has been uploaded. The anime series is set to air this October 2014 which falls under the Fall/Autumn 2014 anime season.

The cast was recently announced and can be viewed here. There have been five manga adaptations based on the game published by ASCII Media Works, Ichijinsha, Kadokawa Shoten and Media Factory. Comic anthologies and light novels were also published, as were several music albums. An anime adaptation produced by Hoods Entertainment is scheduled to air from October 2014.

Daitoshokan no Hitsujikai synopsis from Haruhichan: