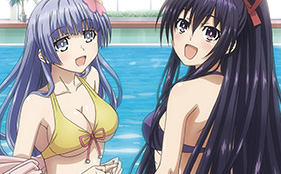 The official website of the Date A Live Movie: Mayuri Judgement began streaming a new promotional video for the upcoming summer 2015 movie last Wednesday. The new video itself is to advertise the film’s Singaporean release, while also giving us a glimpse of some of the events in the film and focusing on the girls of the series. Additionally, the main theme of the movie is also previewed, Invisible Date by sweet ARMS. The movie is directed by Keitaro Motonaga (Date A Live, School Days) and animated by Production IMS (Date A Live II, Ore, Twintail ni Narimasu).

Date a Live: Mayuri Judgement will release in select theatres across Singapore from October 29th. The film already released in Japan earlier this year in August.

Advance tickets for the film have opened earlier this year and various Japanese outlets offered various bonuses if you pre-ordered the tickets from them, with 8 stores offering limited edition bundles with the tickets. The outlets and bonuses are: