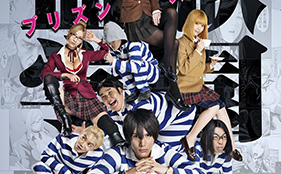 The official website of the live-action drama adaptation of Akira Hiramoto’s Prison School (Kangoku Gakuen) manga began streaming a new special preview video, and it gives us a taste of how prison life will be tough for our five not-so-lucky prison boys. The video also previews the show’s theme song, “Searchlight” by Good on the Reel. The new TV series will begin on MBS on Monday, October 26 at 12:50am JST. The drama will then air on TBS on the 28th at 1:11am JST.

Recently, a brand new TV commercial which asks viewers which is better, breasts or butts?

Recent visual for the TV drama: