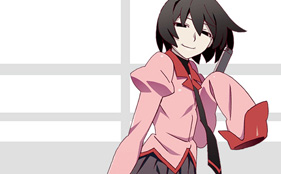 Aniplex began streaming a new English subtitled trailer video for the upcoming anime adaptation of NisiOisin’s Owarimonogatari on Saturday. The trailer previews the ending theme song “Sayonara no Yukue” by Alisa Takigawa and the anime will start on October 4th.

A 15-second commercial was also revealed:

In addition to this, a double page spread of the series was featured in the October 2015 issue of the Japanese anime magazine NewType. You can purchase this issue of NewType magazine here.

In addition to this, the official website of the anime adaptation of NisiOisin’s Owarimonogatari has launched revealing new information about the upcoming TV anime, which will start on October 4th. In addition the site has also revealed the first visual and promotional video.