Coming to us from Cowboy Bebop director Shinichiro Watanabe, Zankyou no Terror takes the sensitive subject of terrorism and turns it into a story of the characters behind the disaster rather than the event in itself.  Given Shinichiro’s obvious pedigree, with series like Samurai Champloo under his belt, this show is going to be picked apart more than most airing in the summer season.  Considering anything other than a masterpiece would be considered a disappointment in his book, it comes with good reason.

Zankyou no Terror is about two boys, Touji Hisami and Arata Kokonoe, who appear to be terrorists bent on destroying parts of Tokyo in some undoubtedly strange ways.  We don’t really understand the motives yet, as the first episode focuses more on their relationship and actions.  This episode is actually very reminiscent of American heist movies like HEAT or The Town in it’s introductory pacing.  It’s to the show’s benefit, as it leaves more time to show the spectacle and attitude present in Zankyou no Terror in order to help the viewer understand what they’re getting into.  A method you don’t get very often in airing anime, evident in how many times you hear “it gets better” as an excuse to keep watching something.  What seems to be a challenge in this industry is giving those who are watching watching a good feel and idea of what their show is going to be focused on.  Luckily, Zankyou no Terror finds itself quickly and pretty much blows every other premiere this season out of the water in terms of presentation. 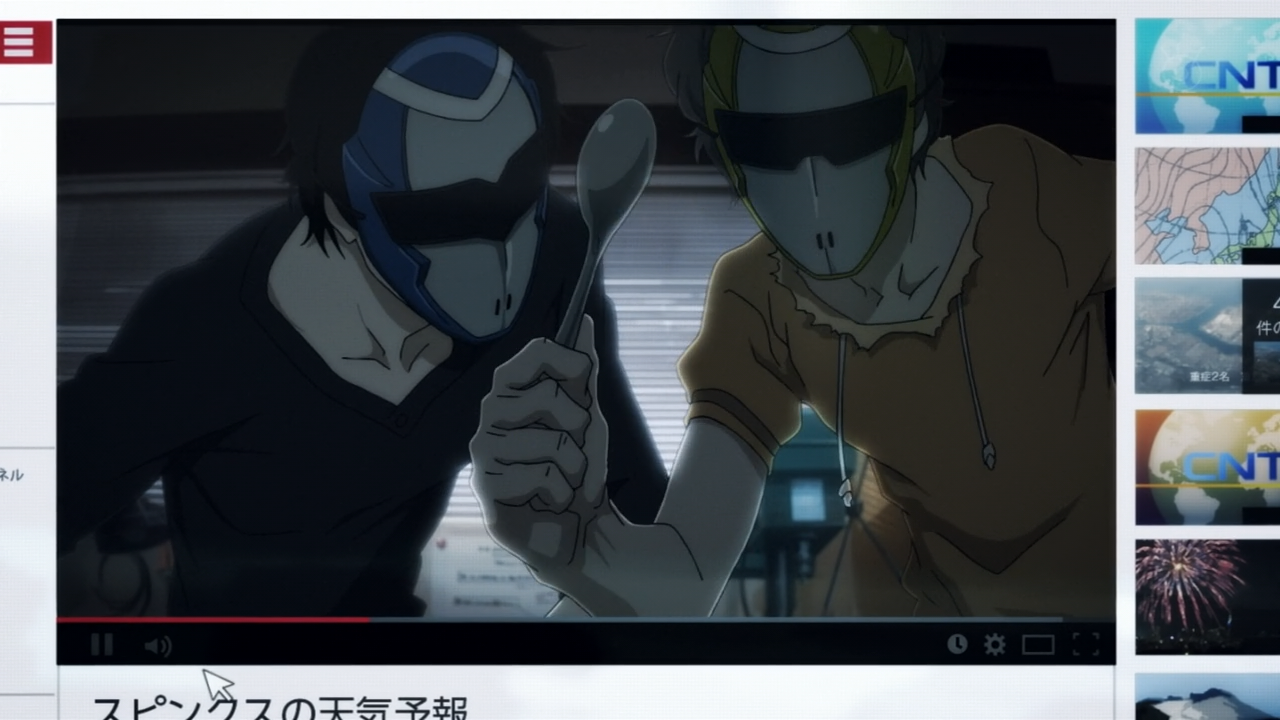 But Zankyou no Terror is about the characters, and they seem to be shaping up to be an interesting bunch. Touji Hisami is by far the most peculiar and interesting. One of the terrorists, Touji has a unique flamboyance that doesn’t come very often in male characters.  It isn’t remotely feminine, while still conjuring an almost safe feeling to his speeches and actions.  He’s a potentially unique character with a lot of things going for him in terms of sheer quality.  You don’t get a character that doesn’t quite fit into any stereotype perfectly like Touji manages to accomplish.  There’s also Araka Kokonoe, the second accomplice in the acts of terrrorism present.  It’s hard to discern what exactly he’s all about, but it’s made pretty obvious he was scarred by a traumatic event as a child that led to the murder of some of his friends.  While both Touji and Arata shared this experience, Arata seems more affected by it.  A possible motive for their actions, definitely, but it isn’t explicitly stated or expanded upon outside of a very well directed flashback. 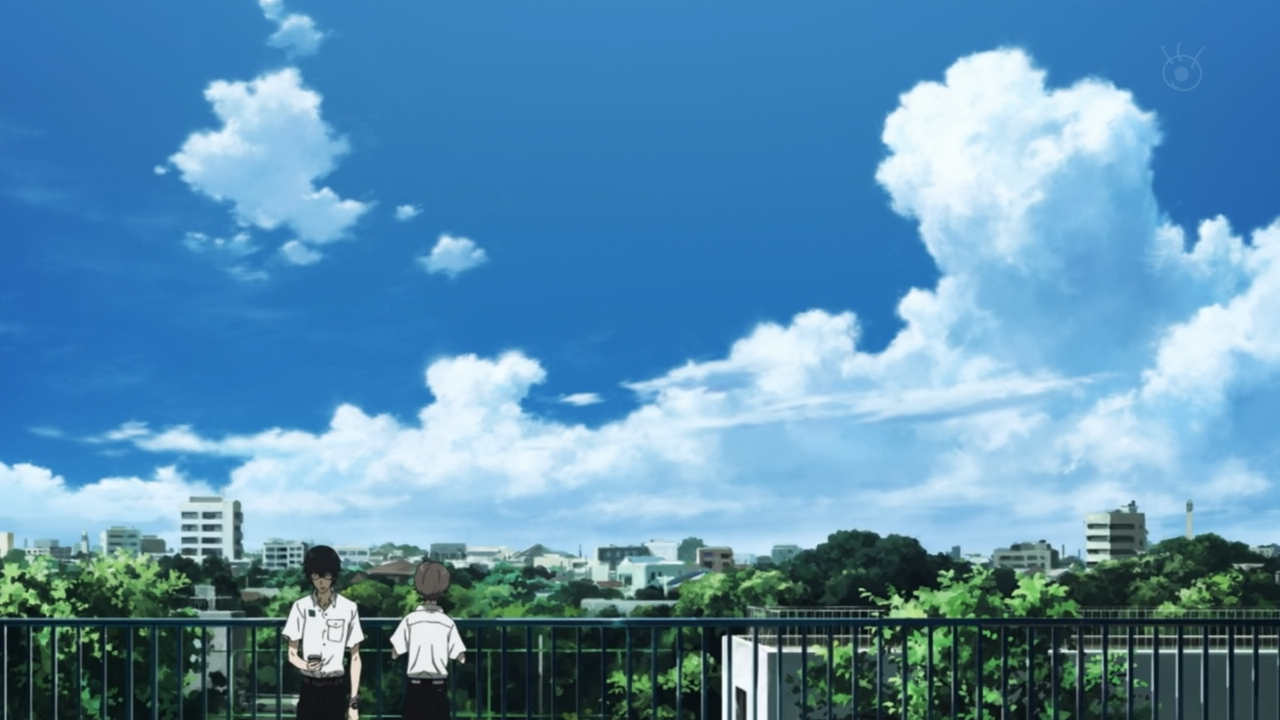 Lisa Mishima rounds out the cast of notable characters in Zankyou no Terror.  She’s a heavily bullied student at the high school that Arata and Touji move to.  Lisa is a bit of an oddball even in comparison to the two main characters.  She seems heavily scarred and constantly receives text messages from her mother that, sadly, were not translated in most versions of the first episode out right now.  They don’t really go into much depth at all explaining what Lisa is going through or why exactly her mother is pestering her so much, but there’s a possible connection between her and the two boys in the traumatic event briefly shown in the episode.  It’s an exciting character arc that comes off as intriguing, if nothing else.  Another character  is introduced by the name of Shibisaki is also present. He doesn’t really give us much substance or exposition as to his character, but the guy seems important enough to warrant a mention of his existence.

Worth a mention is the animation quality and character design present.  Reminiscent of Shinichiro’s early works, Zankyou no Terror has beautifully animated body movement that is a treat to watch.  It’s almost hard to look at as the actual framerate feels choppy in comparison to what’s actually happening.  It’s the only glaring flaw with the episode, as the animation style Shinichiro utilizes often is almost too ambitious for the budgeting required in anime development.  A very sad thing to mention, as it’s not the fault of anything aside from budget, but there’s no doubt the way frames are utilized in anime makes for a choppy experience.  You never really notice something like this until you watch something with sheer irredeemable quality like Zankyou no Terror.  It is worth pointing out, though, that certain scenes DO use the full 24 frames per second in movement.  In those circumstances, it’s some of the best looking animation you’ll see this year and beyond.

Character design is top notch with an art style that doesn’t completely hearken to modern standards while still seeming familiar.   A nice color palette that is relatively varied while having a focus on the color blue and gray.  The set piece of an exploding building at the end of the episode looks absolutely beautiful, and many of the background environments are pretty enough while not taking your attention away from what actually matters.  It’s hard to talk too much about variety considering it’s the first episode, but there hasn’t been a dull visual yet.

Zankyou no Terror did itself a huge favor by having such a great premiere.  It knows exactly what it wants to be, and that shows.  From the looks of it, Shinichiro Watanabe is about to hit another home run with Zankyou no Terror and it honestly shouldn’t come as much of a surprise.  When it comes to first impressions, very little comes to mind that does them quite as well as this.  Zankyou no Terror is telling a compelling story under extremely stressful and dire circumstances, and just about everyone should be watching.

Did you see the first episode of Zankyou no Terror?  Let us know how you felt in the comments below.