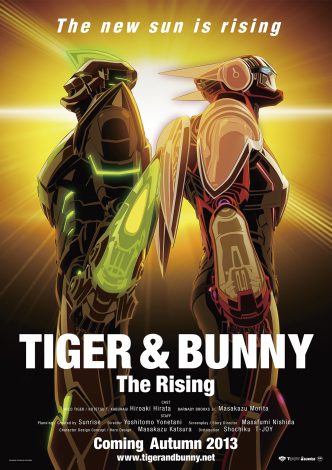 These past few months have seen a lot of epilogue movies for various anime, such as the Mahou Shoujo Madoka Magica Movie 3, the Ano Hana movie, and more recently Tiger & Bunny: The Rising. One thing to note is that the first movie – The Beginning – is completely irrelevant to the whole story, so if you feel like you have to watch that before starting The Rising, you don’t. The Beginning serves as a “what if” for the beginning of the series, while The Rising concludes everything after the last episode. Is the Rising worth your time? In short – yes, but let’s get into the nitty-gritty. Tiger & Bunny: The Rising will be shortened to TBR for the remainder of the review.

Being in a theater has its perks when it comes to sound engineering, and TBR makes  great use of the surround sound provided by theaters. Explosions feel impactful, and hearing the orchestral battle music from the series in surround sound put a lot of people on the edge of their seats during fights. The movie was in Japanese audio with English subtitles, and thankfully, all the voice actors from the show return to reprise their roles.

TBR, just like the show, makes use of a hybrid of CGI and hand-drawn characters. If you had qualms with the show’s use of CGI, this movie won’t change your mind. That said, the animation here is top-notch, and the special effects benefit from being played on the big screen. Special effects look sharp, colourful, and like the sound effects, feel impactful. The action feels fast and fluid, and while it doesn’t break any new grounds in terms of animation achievements, what’s there is great. Characters animate well, and some of the new Heroes & Villains in the movie have awesome character design. Kaede (daughter of Tiger) makes a comeback as well, and she too gets a new wardrobe. Pao-Lin also gets a new hair style as well, something that surprised a lot of the viewers.

Now comes the most important part – the plot of the movie. Ano Hana’s movie made a bad choice when it decided to re-use half the anime’s scenes in the movie. There’s probably only a minute’s worth of footage from the anime used in TBR. The plot in the movie follows Tiger following the aftermath of the final battle. As Tiger is losing his powers, his ability to perform well decreases gradually each day, relying on Barnaby to finish up the mess. Apollon Media (the sponsors for Tiger and Barnaby) is bought over after financial troubles, with Mark Schneider, a famous CEO, re-structuring management and other parts of the company. Tiger is cut out of the duo, forced to find a new job, and a new hero, Ryan Goldsmith aka GOLDEN RYAN, taking Tiger’s place. Golden Ryan’s ability is gravity control. The plot also goes into a legend, where the goddess of Justice is unhappy with the greed of man and sent curses upon them. Four new villains show up: one that can create clones, one that can put people in a deep sleep state, and one that can create ultrasonic blasts. I won’t spoil the fourth villain as he also serves as an important plot point. Overall though, the villains were average; their wits, combined with their NEXT powers, made them fun to watch, however they are largely forgettable. You’ll only remember them for the 90 minutes of the movie, and after that you’ll barely bring them up again. Another problem I had was with Lunatic. I was hoping to see some more involvement from him, but like the anime, he shows up briefly, and no conflict with him is resolved.

The plot is very well done, with moments making the viewers feel very sympathetic for Tiger and his family throughout the movie. Golden Ryan is also handled very well, which is surprising as I was worried there wasn’t enough time to develop his character. The new villain is also fairly well done, and at some point I noticed some of the viewers cheering for him during the movie. The reason being is that his cause sounds very similar to Barnaby’s cause.

There’s something else in the plot that’s rather interesting to note: the movie also explores some of the psychological damage inflicted on Fire Emblem during his early years. As many viewers know, Fire Emblem is openly gay. In the movie, he get’s put under a deep sleep state and is forced to re-live some of the more painful memories of his childhood, such as social seclusion and identity problems. It’s all handled surprisingly well and shows a side of Fire Emblem that we don’t normally see. One of my main gripes with the anime was that Fire Emblem didn’t get enough background story (this was also my main problem with BIson), so seeing this was rather neat.

Overall, the plot was a real treat to watch. It barely rehashed anything from the anime, the new characters introduced were great to watch, the plot was well-written with a enough twists and turns to keep the audience interested. Unlike many of the other epilogue anime movies, it didn’t try to shove the plot in your face, or over-explain things to the viewer. It felt like a satisfying conclusion to another great Sunrise series.

If the bulk of the review hasn’t made it clear enough, I highly recommend watching Tiger & Bunny: The Rising. Its delivery of the plot, interesting character development, fluid visuals and quality audio make this one of the best animated films to come out recently. For viewers who went to see the movie in Canada, you would get a free 12” x 18” double-sided premium cardstock Tiger & Bunny movie poster. It looks rather nice and depending on some theaters they would give out multiple copies of it.