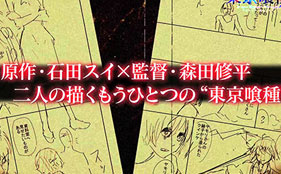 The first commercial has been released has been released for Tokyo Ghoul √A, the second season of Sui Ishida’s Tokyo Ghoul anime. This new commercial recaps a few scenes from the first anime as well as giving the smallest glimpse what the upcoming series will be about.  The new season will follow an original story written and overseen by Ishida himself. The series will once again be animated by Studio Pierrot (Naruto Shippuden, Bleach) and the majority of the cast and staff will return to reprise their roles. The anime’s Ending theme song will be performed by amazarashi. The series has been reported to have a total of 24 episodes, spanning two seasons; from the Winter 2014/2015 anime season till the end of the Spring 2015 anime season.

Tokyo Ghoul √A will air from January 8 next year on Tokyo MX during the Winter 2014/2015 anime season. There will also be an advanced screening session of the first episode on January 4 at the Toho Cinemas in Nihonbashi.

Additionally the first promotional video for the upcoming series was earlier released: