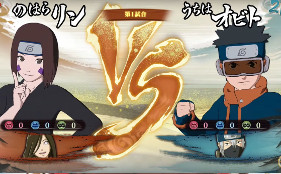 With just two weeks to go until the release of the biggest game yet in the Naruto franchise, Hiroshi Matsuyama, CEO of CyberConnect2, released information in Bandai Namco’s newest video that Rin Nohara and Obito (genin) would be available as playable characters in Naruto: Ultimate Ninja Storm 4 along with Studio Pierrot giving them special permission to use real-time animation cuts for the game. Not only are the Storm games regarded as fantastic fighting games, they also walk you through the Naruto story chapter by chapter, featuring the voice talents in the anime and detailed 3D models.

In the most recent video of game footage, the video featured fight scenes between Genin Obito and Rin alongside Hanabi Hyuga and Genin Kakashi. The game plays through the very end of the Naruto storyline, including the emotional chapter of Obito and Kakashi’s time as genins in Minato’s squad. While the game has the largest composition of Naruto characters out of any in the Storm franchise, there are also characters featured from Naruto the Last and Boruto, such as Hinata, Naruto, Sasuke, and Sakura from The Last and Sarada, Boruto, Hokage Naruto, and Sasuke from Boruto. While Namco has not released the date Hokage Naruto and Sasuke DLC will become available, there are still many  characters to chose from.

Naruto Shippuden: Ultimate Ninja Storm 4 releases on Febuary 4th and is available for PS4, XBox One, and PC.