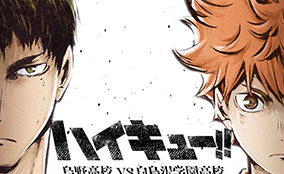 The recent issue of Shueisha’s Shonen Jump Next! magazine has revealed that the upcoming third season of the anime adaptation of Haruichi Furudate’s Haikyuu!! manga will have its broadcast debut on October 7th. The season itself will run for a total of 10 episodes.

The third season of the anime will be titled Haikyuu!!: Karasuno Koukou VS Shiratorizawa Gakuen Koukou (Haikyuu!! Karasuno High vs Shiratorizawa Academy). It will air on Fridays starting October 7th on MBS, TBS, CBC, RKB, HBC, TBC, and BS-TBS. The times for the episodes will be revealed at a later date.

The second teaser promotional video for the third season has been revealed, which reveals that the anime will run for 10 episodes at the end of the video:

The leading members of the production staff from the previous seasons will return for season 3:

The third season of the Haikyuu!! anime, Haikyuu!!: Karasuno Koukou VS Shiratorizawa Gakuen Koukou, will air every Friday from October 7th on MBS, during the Fall/Autumn 2016 anime season. Further information about season 3 will be revealed in the weeks leading up to the season’s debut.