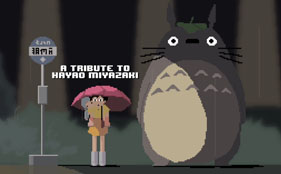 A pixelated 8-bit tribute video has been made for the Japanese film director Hayao Miyazaki. He is known as the masterful storyteller and as the maker of anime feature films and, along with Isao Takahata, co-founded Studio Ghibli, a film and animation studio. This tribute video features some of the Japanese animated films written and directed by Hayao Miyazaki and produced by Studio Ghibli.