The 39th issue of Shueisha’s Weekly Shonen Jump magazine will be announcing on Monday that artist Yoshihiro Togashi is putting his Hunter x Hunter manga series on a two-week hiatus, due to serious lower back pain. The manga will not be running in the 39th issue nor the 40th issue, as Yoshihiro Togashi undergoes treatment. However, he aims to return in the 41st issue, which will ship on September 8.

The manga went on a brief hiatus in July, and Yoshihiro Togashi resumed his manga in June after a hiatus of more than two years. The Hunter x Hunter 2011 anime series will also be ending this year on September 24. 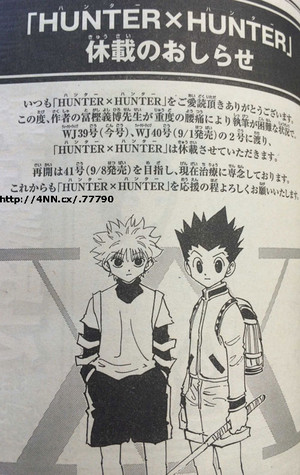