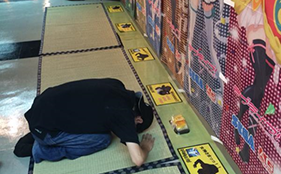 At this point very little that comes out of Japan is surprising anymore, but somehow we manage to drift further and further away from God’s light. In the latest trend coming from the land of the rising sun (aka the land of the shameful son), a Sega (merchandiser for Love Live!) arcade has set up a wall with large posters of the show’s primary characters, as well as prayer mats and an altar to leave offerings before them. It sounds too crazy to be true but hey, photos don’t lie. Twitter user S1Amk visited the location and took some.

Love Live! has spawned quite the fandom since its inception a few years ago and many fans pick up a character they like the most, deeming her their “waifu” or referring to them as best girl. It is a phenomenon fairly well known among the “otaku” community. Many of those who take part are somewhat “in” on the joke, and thus only partake out of irony. Others of course are a little too into it. Love Live! of course isn’t the only show with such a fandom. Some of us in the West (and probably many over there too, since they have to suffer it) find it absolutely cringeworthy – enough to even make the most annoying weeb’s eyes roll.

The original tweet is linked above. The news is somewhat reminiscent of the train shenanigans that took place several months back. What do you think of this new gimmick? Perfectly acceptable good-natured fun or pushing it too far? Let us know in the comments section below!