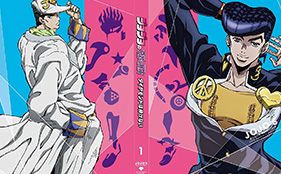 In addition to this, it was recently revealed that the anime adaptation of Hirohiko Araki’s JoJo’s Bizarre Adventure – Part IV: Diamond Is Unbreakable will have a total of 39 episodes, to be released across 13 three episode DVD/Blu-rays between June 2016 and June 2017. Along with these release plans is the news that “Thus Spoke Kishibe Rohan,” the spin-off one-shot from 2013 narrated by manga author Stand-user Rohan Kishibe will be adapted into an OAD, offered on DVD for collectors of the complete series.

The jacket art for Volume 1 was also revealed:

Here is the current release schedule: