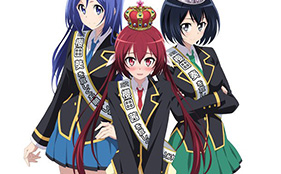 One of this season’s bright, summer anime is Joukamachi no Dandelion, a slice of life comedy with a vibrant, diverse cast of characters with varied personalities and character designs. Being a relatively light hearted slice of life, the OP does just that. “Ring Ring Rainbow!!” by YuiKaori sets a pleasant tone for the anime, as the animation sequence shows the characters, giving a brief idea of their personalities too.

It is a rather heartwarming introduction, and the show is sure to incite many a laugh out of audiences when they watch it. Click below to check it out!

Following up with a delightful ED called “Honey♥Come!!” by Yui Ogura, just as the name suggests, this is another sweet track, coming with its own unique cutesy animation sequence. An enjoyable way to cap off a show and leave one smiling – perhaps even humming the tune! The video with animation and track both is posted below!