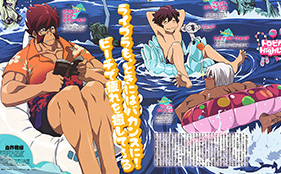 The official website for the anime adaptation of Yasuhiro Nightow’s Kekkai Sensen (Blood Blockade Battlefront) manga series has revealed that the 12th and final episode has been delayed beyond the previously announced July 4-5 weekend dates. The anime’s production committee explained that the staff determined that the final episode cannot air in a 30-minute timeslot, since its required length will be longer than estimated.

In addition to this, the series has been featured as a double page spread in the July issue of Japanese anime magazine Animedia. The new visual features Klaus von Reinherz, Leonardo Watch, Zapp Renfro and others enjoying a nice time at the sea. You can purchase this issue of the Animedia magazine here.