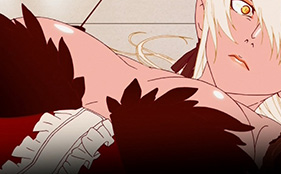 The first episode of the anime adaptation of NisiOisin’s Owarimonogatari television anime ended on Sunday with an announcement that the Kizumonogatari anime project will be a film trilogy. The first film, Kizumonogatari I Tekketsu-hen (Blood and Iron), will open on January 8 and is directed by Tatsuya Oishi, and advance tickets will go on sale on October 9 with a bonus clear file folder at participating theaters. The films Kizumonogatari II Nekketsu-hen (Passionate Blood) and Kizumonogatari III Reiketsu-hen (Cold Blood) will then debut at a later date. Kizumonogatari is the third volume in NisiOisin’s Monogatari book series and is a prequel to Bakemonogatari. It tells the story of how protagonist Koyomi encounters the female vampire that would turn him and his journey to return to his normal life.

Here’s a preview of the clear file to be bundled with advanced tickets: “I think it’s about time I talked about Kiss-Shot-Acerola-Orion Heart-Under-Blade. I believe it’s something I have to do. I met her in the spring break between my second and third years of high school. That meeting had such impact and was also quite devastating.”