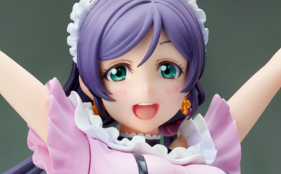 If you have been following the figure scene for any amount of time it should come of no surprise to you that Idol shows get plenty of figures. After all, they are super popular shows that generate tons of revenue if manufacturers are willing to design similar outfits for a multitude of girls. One of these lines has been from Dengeki and Stronger, the Love Live! School Idol Project Birthday Figure Project! The most recent edition to this specific line of Love Live figures (not to be confused with Alter’s LL series) is none other than Nozomi Toujou. Posing in a matching outfit to the rest of the line, Nozomi’s main colors are pink with the series’ signature black accents. Like the rest of the Birthday Figure Project series, the outfit features the frilly dress, colorful ribbons, thigh-highs, gloves, and boots.

This series of 1/8 figures is a limited/exclusive release from Dengeki that has her retailing at 11,000 yen (almost 92 USD). While she is available at many secondary retailers as well, if you purchase her through Denekiya you will receive a bonus A4 Clearfile and a card with a special message on it. Pre-orders through Dengekiya just started and will close on December 6, 2015 for the eventual May 2016 release date. Also as a heads up, pre-orders for Maki’s figure from this series will close on Dengekiya on October 25 in Japan, so if you want those pre-order exclusives for her figure you will need to act soon!