Last May it was announced that Shounen Jump‘s 27th weekly magazine issue would reveal that the production of a third season of the Kuroko’s Basketball television anime has been green-lit.

This year’s 32nd issue of Shueisha‘s Weekly Shonen Jump magazine is revealing the 2015 release date and a new illustration for the third Kuroko’s Basketball television anime season on Monday. There will be a Kurobas Festival event to celebrate the new season with exhibits, original goods, original drinks and food, and other points of interest. 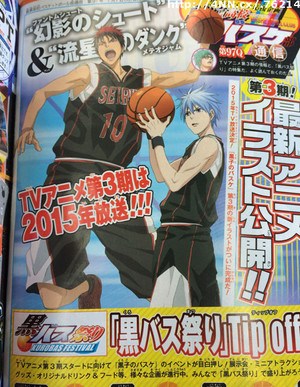