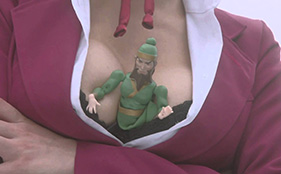 The official website of the live-action drama adaptation of Akira Hiramoto’s Prison School (Kangoku Gakuen) manga has revealed a brand new TV commercial which asks viewers which is better, breasts or butts? The new TV series will begin on MBS on Monday, October 26 at 12:50am JST. The drama will then air on TBS on the 28th at 1:11am JST.

Recent visual for the TV drama:

A new visual of the series has been featured in the September issue of NyanType, the poster features Hana Midorikawa, Mari Kurihara and Meiko Shiraki in prison-themed underwear. You can view the other posters that come in this issue here.